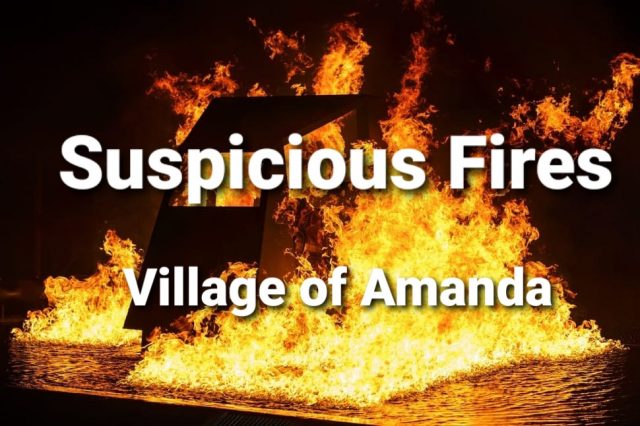 In that post, which still stands at this moment raised concerns with a warning that the two suspicious fires may be linked.

This is a direct quote and also a screenshot of the social media post.

“Public Notice
Warning
The Village of Amanda had two (2) suspicious fires in the last couple of days. The fire inspector thinks both fires may be linked.

Be on the look out for anything suspicious. If you suspect a fire is being set call 911 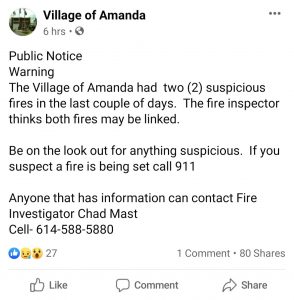 At one point, the Amanda Township Fire Department had commented on the post made by the Village of Amanda, informing the public that the information being communicated was incorrect. That comment has since been deleted.

We reached out to the Amanda Township Fire Department for comment and their response was, “Please read the statement from the Amanda township fire department. They made post without FD knowledge and it was incorrect.”

Since the response to our question to the Amanda Township Fire Department, they have made a public Facebook post of their own, explaining the suspicious fires.

“In light of the attention this situation has attracted we feel it is necessary to ensure our residents receive the most accurate information regarding the two fires in the Village of Amanda. The Village of Amandas Facebook page and other related posts by officials misconstrue the words of a County Fire Investigator. They shared their own theory with the residents, without consulting the Fire Department, that uses inciting words and creates a narrative that is not supported by any evidence at this time.

The investigation revealed NO information supporting a theory that the fires are linked.

The investigation revealed NO CLEAR EVIDENCE of arson.

The investigators made NO demographic profile of a person of interest

The simple fact is we have NO information supporting these theories. We cannot say that they are not a possibility, we are simply saying we have NO EVIDENCE to support the implicated theories by the Village of Amanda Facebook page and members of the administrations personal Facebook pages. We have asked them to remove or edit misleading information to which they have chosen not to.

We always encourage residents to be vigilant. If anyone has any information on the fires we encourage you to reach out to us.”

One thing is clear at this point, there were two suspicious fires in the Village.