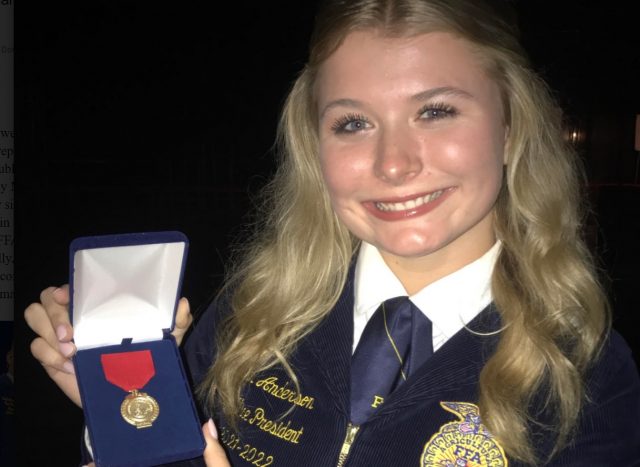 PICKAWAY – Last week at the National FFA Convention in Indianapolis, Indiana, Amanda-Clearcreek FFA public speaker Morgan Anderson struck gold in the National Prepared Public Speaking Career Development Event. Morgan earned 2nd place honors in the nation and a scholarship in the FFA’s National Prepared Public Speaking CDE. This is an exceptional accomplishment considering that there are over 700,000 FFA members in the United States today.

Additionally, Morgan had to first win her public speaking category in the state of Ohio where there are over 26,000 FFA members on record. Morgan chose to write her six to eight-minute speech on “Lab-Grown Meat”. FFA members have to advance through two preliminary rounds of competition before competing in the national finals. Morgan received recognition on stage at the National FFA Convention with over 10,000 people in attendance. This CDE is one of the FFA’s most challenging and competitive Career Development events and Morgan has made it to the top of her CDE area once again.

Finally, to make this accomplishment even more special this will be Morgan’s fourth year in a row that she has won in the state of Ohio and advanced to the national competition in four different Career Development Event areas in her extremely successful FFA career. Morgan is currently a freshman at Ohio University majoring in Journalism and is serving as the 2021-2022 Ohio State FFA Vice-President.