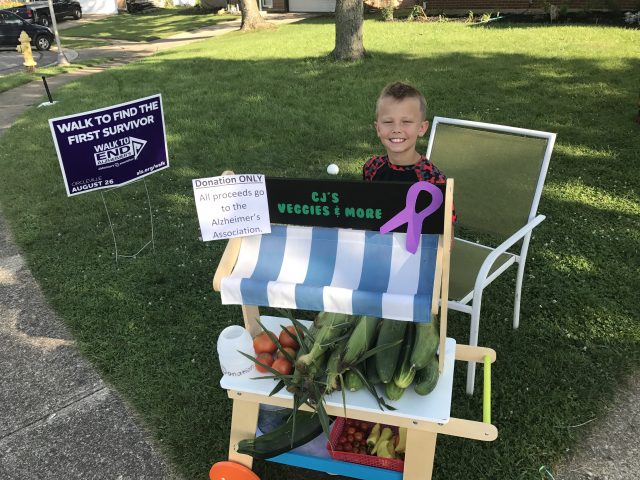 On a seldom traveled street in Logan Elm Village, eight year old Cailen Johnson has been selling vegetables from a small vegetable stand to raise money for Alzheimers. Cailen’s mom (Chrissy Johnson) will send out a notification on Facebook to let neighbors, friends, and family when the stand is open for business.

Cailen said he raises funds because,  “My grandma died with Alzheimers, and then a few weeks later, we started raising money for it. We did a walk, and then I started doing lemonade and bracelets and vegetables.” Cailen said he’s been raising funds for Alzheimers for four years.

Cailen gets the vegetables from his family garden and his grandparents’ garden. His mom helps him with the fund raisers, and sometimes his little brother. He’s sold $382 in vegetables. Through all the fundraisers, this summer, he’s raised $1382 of his $1500 goal.

On August 26th, Cailen will be walking in the 2017 Walk to End Alzheimer’s in Circleville, OH. He’s raising funds at a website created for the walk. If you’d like to help him reach his $1500 goal, you can use this link: http://bit.ly/cailen2017