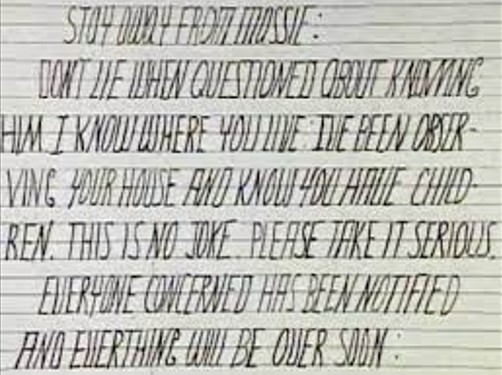 CIRCLEVILLE – If you have lived in Pickaway County for any length of time you have heard of the town’s unsolved secret, The Circleville Letters.

The unsolved incident takes you back before social media, texting, or even emails, when receiving a written letter from friends and family was common.

In 1976 several Circleville Ohio residents started receiving blocky letters written in disguise warning of nefarious incidents and warning of things to happen if they did not stop.

Lots of people received the letters but the target was mostly on an unproven affair (at the time) between bus driver Mary Gillispie and a Superintendent of Schools Gordon Massie. The letters started with minor threats of exposure of the affair to death threats to family members and Gillispie herself. Gillispie’s husband Ron became involved when he started receiving letters, and then a threatening phone call. After the call, Ron Gillispie became inraged and went after the supposed writer armed with a gun but ended up dead in a truck wreck heading to his unknown location. Pickaway Sheriff’s department ruled his death an accident of drunk driving but did report that one bullet was fired from the gun.

This did not stop the letter writer from sending even more mail to people in the community, even targeting Sheriff Radcliff in the cover-up of the death of Ron.

Some calmness to the letters happened after the superintendent and Mary came forward with the fact that there was an affair. It wasn’t until 1983 when signs were placed along Mary’s bus routes that continued the harassment. Mary was angered by the almost decade-long threats attempted to tear down one of the signs just to find it was booby-trapped with a gun for if she ripped the sign down she would be shot and killed.

Pickaway Sheriff’s department was able to pull the serial off the gun even though it had been damaged in an attempt to conceal it. The gun belonged to Ron Gillispie’s brother Paul who was later charged and convicted in the attempt to murder Mary, although he was never charged with writing the letters.

Did the case close, right? Wrong the letters continued even when Paul was in prison and did not have the ability to send them. It is believed that several people were involved in the letters all that were related to the original targets Mary Gillispie and the superintendent involved in the affair.

48 Hours who was filming in Circleville recently opens up the case and attempts to add more into the conclusion of the Circleville Letter writers.

Beverley East, a forensic document expert, believes she has identified the
Circleville letter writer. At the request of 48 HOURS, East examined 49 letters.

“I would go into court and swear on the Bible on the evidence that I found,” East tells Moriarty.

“I would say one person wrote all of these,” East continues.

Is the case closed? Has the writer been finally identified?

The story will air on Wednesday, August 25 at 10/9c on CBS and Paramount+.