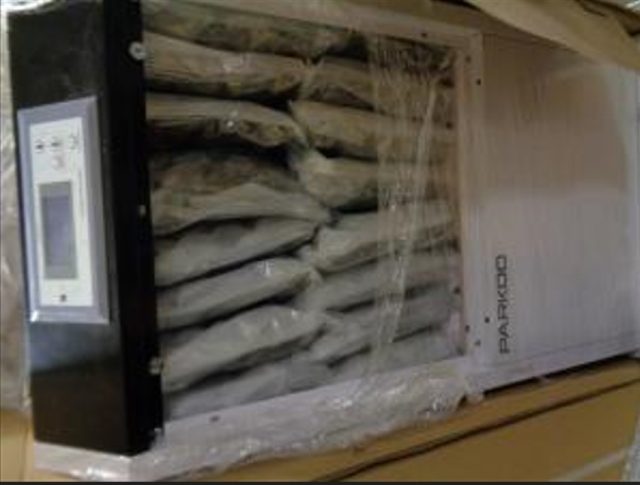 CINCINNATI— CBP officers in Cincinnati made quite the discovery this past weekend when Narcotic Detector Dog, Bruno, alerted to a shipment of dehumidifiers, with each one containing vacuum sealed bags containing marijuana.

The shipments arrived in the port of Cincinnati on September 17 and while conducting canine operations, Bruno alerted to these dehumidifiers that were arriving from Ontario, Canada. Officers inspected the first shipment and discovered vacuum sealed bags hidden inside the dehumidifier cases. Officers tested the substance which was positive for marijuana. Officers then inspected all 12 dehumidifiers and discovered that each one had concealed bags containing marijuana-413 pounds in total.

“Our canine teams are an invaluable asset to the CBP enforcement strategy,” says LaFonda D. Sutton-Burke, Director, Field Operations-Chicago Field Office. “These interdictions are a testament to the hard work, dedication and training these teams employ on a daily basis protecting America.”

These dehumidifiers were heading to a company based in Great Britain and the illicit narcotics had an approximate street value of $1.10 million.

Cincinnati’s Port Director, Richard Gillespie, emphasized that transnational criminals are desperate and will take any measures within their reach to get their illegal narcotics across our borders. “Our officers have been trained to identify and stop shipments that pose a threat to our nation and our international counterparts. We are committed to the CBP mission and continue to assist our law enforcement allies around the world.”