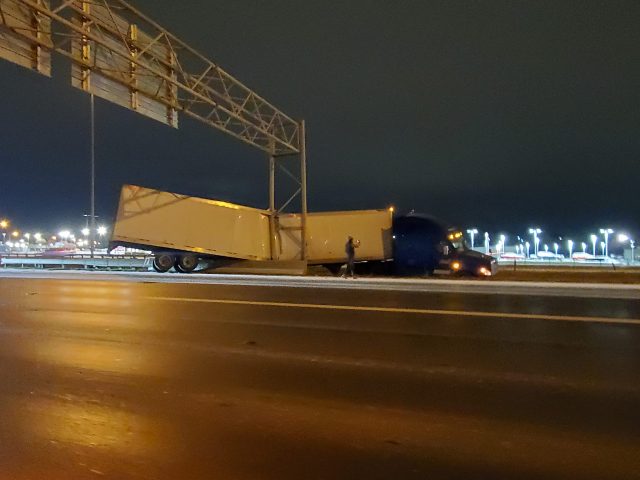 COLUMBUS – A semi-crash wreck took only seconds to happen but it took towing companies, and ODOT almost 18 hours to clean it up.

Scioto Reporter was first on the scene last night after the call went out of a semi that was partial off the roadway on I-70 W/B just W/O Brice road in the far left lane blocking traffic.

When police and emergency crews arrived on the scene they found the driver was ok and told police that ice was the factor in the wreck.

The next 18 hours consisted of an ODOT, a crane company, and a heavy tow truck driver’s hard work. Because the semi-trailer was bent around the interstate sign and it also had to be removed before working on the truck and trailer.

Work started on the sign around 11 am shutting down Westbound traffic in the area, and Kyle caught some of that action around noon here: https://fb.watch/9MY_whLGfK/

It took until 4:53 pm to completely remove the trailer and truck and open up Westbound traffic. According to Pro Tow, the trailer was full of linens and had to be removed before the trailer was. The interstate sign will remain down for now with an unknown time of being reinstalled.

Capital City Crane was also on the scene.