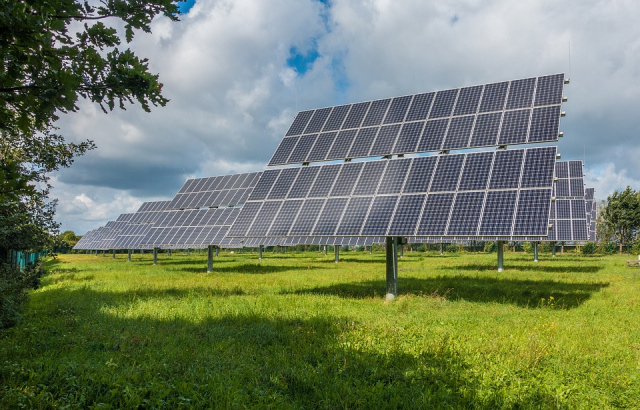 Portsmouth, OH – Development is moving ahead following Ohio Power Siting Board approval of the Yellowbud Energy solar development to be built by electrical workers in Ross and Pickaway counties. The investment comes as communities recover from the COVID recession and the lasting economic impact of
the pandemic.

The project will employ an estimated 350 local electrical workers when it breaks ground in 2021. The Yellowbud generating facility will deliver approximately $2.5 million in local tax revenue for its host
communities: Deerfield and Union townships in Ross County, and Deercreek and Wayne townships in Pickaway County. The 274-megawatt solar photovoltaic electric generating facility will connect with the Biers Run to Circleville 138kv transmission line, ensuring energy resilience for the region’s industrial, commercial, and residential energy customers.

Despite of the positive economic outcomes of Yellowbud and other renewable-energy projects, Ohio lawmakers are considering bills which could further complicate the Ohio Power Siting process,
discouraging energy-investment and facility construction in Ohio. IBEW Local 575 Business Manager and Financial Secretary Dan Shirey released the following statement for publication:

“On behalf of the membership of IBEW local union 575, we applaud the state approval of the Yellowbud Solar project in Deerfield and Union townships in Ross County, and Deercreek and Wayne townships in Pickaway County. The project will result in hundreds of construction jobs.

Studies have consistently shown that for every construction job created within a community, one additional job is supported. The benefits from the Yellowbud project go beyond jobs, the project
will generate significant revenue for local schools and local infrastructure projects. The approval of this project will have a lasting impact in our communities.

While we are excited about the approval of the Yellowbud Solar project, the introduction of Senate Bill 52 and House Bill 118 is very concerning. Senate Bill 52 and House Bill 118 work to stop solar
development in Ohio. According to a recent Ohio University report—solar development could result in 54,000 jobs and $18 billion in economic activity—this proposed legislation would pull the rug out
from under good-paying jobs and economic development right here in Ohio. Our area of the state is mostly rural farmland and woods with limited industry. We have potentially five solar projects in the queue for construction over the next two years. These projects could be game-changers for our members and the communities where they will be constructed. We are excited for the opportunity to bid on these projects. Senate Bill 52 and House Bill 118 would be detrimental to the future of these and other projects throughout Ohio.”

Senate Bill 52 and House Bill 118 as introduced would give communities like our areas the choice if we want solar and wind power in our backyards.

As a state legislator in Northwest Ohio, I represent the counties with the most wind development in the state,” said Riedel. “The beauty of this bill is that it gives local control to township residents for them to decide whether wind or solar development is welcome to move forward or stopped where it is not welcome.”

Under this legislation, developers are required to share their application with township trustees 30 days before applying for a certificate (or an amendment to an existing certificate) from the Ohio Power Siting Board (OPSB). After reviewing the application, trustees must vote on one of the following:

– A resolution requiring public input (stipulates that if approved, a certificate is required to be submitted to the voters of the township for approval via referendum)

– No resolution (indicates public support for the project)

A certificate or amendment issued by the OSPB for a project that falls within the area of a township becomes effective on the 90th day after it is issued unless a referendum petition is filed with the local board of elections.

If the petition receives the required number of signatures of at least 8 percent of the total votes cast in the last gubernatorial election, the project must be approved by voters at the next primary or general election before moving forward.

The bill sponsors said that the bill is permissive for townships and provides no hindrance to townships that support wind and solar projects in their region.

“With the introduction of this legislation we look forward to expanding rights of local communities to be more active participants in wind development which affects their daily lives,” said Stein.