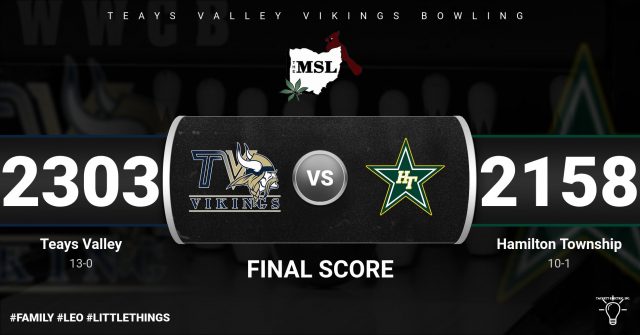 The Vikings continued their strong season on Monday at Wayne Webb’s Columbus Bowl by defeating Hamilton Township to win the County Line Cup. Jullian Cunningham was the match medalist with a 436 series.

The boys started with a strong start of a 1019 series in Team Game 1. In Game 2, the team shot a 931, to enter the Baker games with a 1950-1768 lead over the Rangers. The Rangers shot two incredible Baker games but could not overcome the first game’s deficit.

The Vikings and Rangers play in duel matches for a “County Line Cup” trophy, presented to the winner. The Cup was created by the Rangers Coach Art Short, who created the cup for the matches (boys and girls, respectively). Coach Short and the Rangers are tough and have had an outstanding season.

For the Vikings, Coach Erik Fischer has done an outstanding job of working with the young men this season. Under Fischer’s leadership, the boys have climbed the COHSBC, statistically speaking, during the season.

The Vikings return to the lanes in action at The Palace on January 31st to play against Thomas Worthington. The Vikings will enter the match 13-0 overall, 10-0 COHSBC, and 5-0 OCC-Buckeye.

The Lady Vikings came out of the gates with a 598 series in Game 1, and followed it up with a strong 706 in Game 2. Unfortunately, the team could not keep up the momentum in the Baker Games.

Emma Cremeans had her personal best 124. Kenna Barnes continued her incredible Sophomore season with a 207 in Game 2. Under Coach Leah Deaner’s leadership, the young Lady Vikings continue to grow and develop on the season, and have very high hopes going into the future.

The two teams face off in duel matches for the County Line Cup. The trophy was created by Hamilton Township Coach Art Short, who wanted the players to play for a special trophy together. The Lady Vikings won the trophy in 2021, and the Rangers won the trophy this evening. The series is now tied 1-1.

For Hamilton Township, Coach Emma Peruzzi has done a great job with their team, improving their team scores throughout the season. The Lady Rangers shot an incredible 840 in Game 2, and shot a 280 series in the two Baker Games.

The Lady Vikings (4-9, 3-7 COHSBC, 2-3 OCC-Buckeye) will return to duel match action on Tuesday, January 31st at The Palace against Thomas Worthington.

The Vikings JV team continued their strong season with another victory on Monday at Wayne Webb’s Columbus Bowl. The Vikings defeated Hamilton Township 1973-1546. Jacob McDonald was the match medalist with a 370 series on the evening.

The Vikings jumped out to an early lead, shooting a strong 853 in Game 1. Ryan McDonald has his personal-best 211 to compliment with Jacob McDonald’s 201. In Game 2, the Vikings used a team effort to shoot an 807. The Vikings then shot a 185 in their 2nd Baker Game to seal the deal.

The Vikings JV-A team moves to 11-1 overall on the season, 9-1 in COHSBC play, and stayed 4-1 in OCC-Buckeye play. Coach Chuck Cunningham & the JV boys have had an incredible year, the strongest season the JV team has ever had.

The Vikings JV team returns to action on January 31st at Thomas Worthington.

The Boys JV-B team did not have an opponent this evening. The Vikings, however, continued to work on their fundamentals and worked on their spare shooting together.

The Lady Rangers from Hamilton Township used tremendous energy in the Baker games but were unable to overcome the 100-pin deficit.

The Lady Vikings move to 2-2 on the season, 2-1 in COHSBC play and 0-1 in OCC-Buckeye play. The Lady Vikings JV team will return to the lanes on January 31st at The Palace against Thomas Worthington.