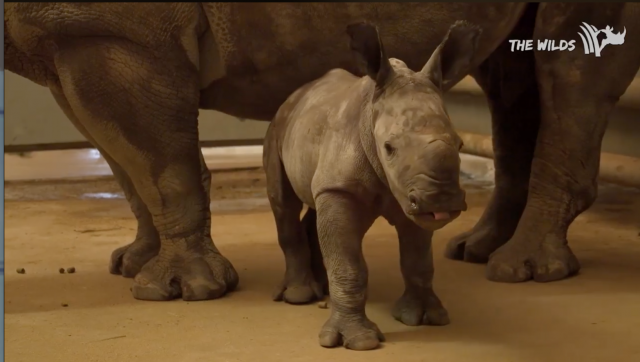 Cumberland, OH – The Wilds is celebrating the arrival of a female white rhinoceros calf, the second to be born at the conservation center in a little over a month. The calf was born in the facility’s large, heated rhino barn during the early morning hours of Friday, December 6, 2019.

The rhino has been named “Bing” as recognition of Drs. Hetty and Arthur Bing and their generous gift to expand the Overlook at The Wilds. This expansion, which will be completed by May 1, 2020, will provide guests with additional opportunities to enjoy dining and other amenities that enhance their experience. Dr. Arthur Bing has also served on The Wilds’ Advisory Committee for 15 years, helping to shape The Wilds into an internationally-known facility that inspires guests to care about the future of wildlife.

Bing and her 10-year-old mother, Anan, who was also born at The Wilds, are doing well and continue to bond. Animal Management staff note that Anan, who has previously given birth to two other calves and is an experienced mother, is being very attentive to her newborn. This is the second offspring for Bing’s father, 21-year-old Kengele, who was born at the San Diego Zoo Safari Park. His first calf, Scout, was born at The Wilds on October 23, 2019 to mother, Agnes. 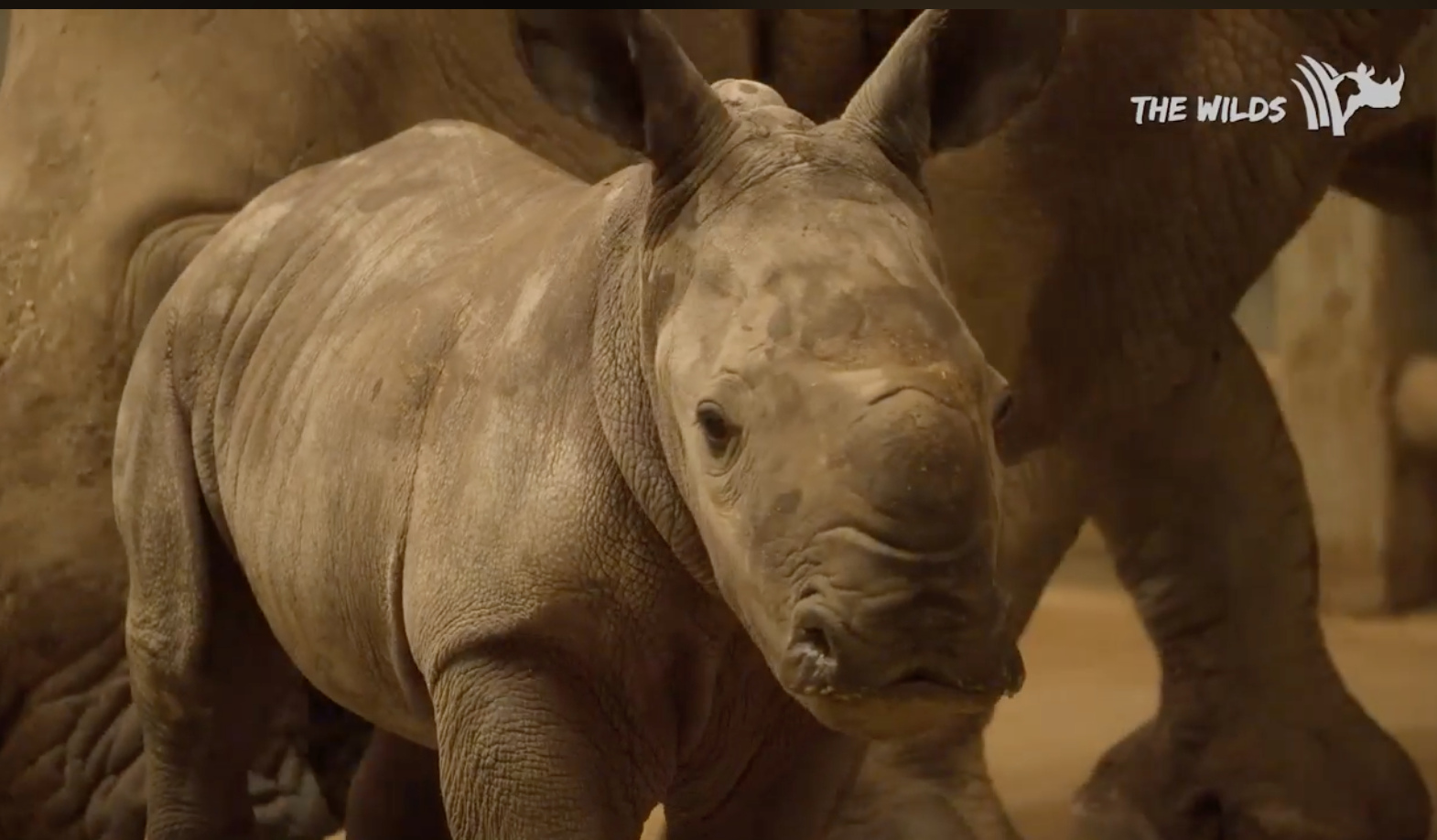 The pairings of Kengele and Anan, and Kengele and Agnes, were recommended through the Association of Zoos and Aquariums’ (AZA) Species Survival Plan® (SSP). This program is designed to maintain a sustainable population and genetic diversity of threatened and endangered species in human care. The Wilds has also welcomed the births of eight Asian one-horned rhinos since 2005. The most recent Asian one-horned rhino calf, a female named Rohini, was welcomed into The Wilds’ family on August 24, 2019.

“Each birth of a rhino here at The Wilds is an incredible achievement as all rhino species continue to face significant threats in their native range. Over the years, we have learned more about rhinos, contributed to scientific knowledge about them, and helped raise awareness to inspire people to take action to help protect them. Our work is not done! However, the birth of this rhino calf is certainly exciting as the calf represents hope for the future,” said Dr. Jan Ramer, vice president of The Wilds.

“We are very proud of the success of our rhino program, as well as all of the conservation work we support to help protect a variety of threated and endangered wildlife species across the globe. The arrival of a little one is always particularly special and provides us with additional encouragement that we’re making a direct impact on saving species,” said Columbus Zoo and Aquarium President/CEO Tom Stalf.

The white rhino population had dwindled to perhaps only 50-200 individuals at the beginning of the 20th century, but through conservation efforts, the population of white rhinos in their native African range has rebounded to about 20,400 animals. However, even with the increase in numbers, the species remains classified as near threatened by the International Union for Conservation of Nature (IUCN). All five remaining rhino species in Africa and Asia (white rhinoceros, black rhinoceros, greater one-horned rhinoceros, Javan rhinoceros, and Sumatran rhinoceros) are persecuted by poachers who sell rhino horn for ornamental or traditional medicinal purposes even though there are no scientifically proven health benefits for its use. The horns are made of keratin—the same substance that makes up fingernails and hair. The International Rhino Foundation, which receives support from The Wilds, estimates that one rhino is killed every 10 hours for its horn.

White rhino calves are born after a gestation of 16 months and they can grow to be 4,000 pounds and six feet tall at their shoulder. Their habitats typically consist of plains or woodlands, interspersed with grassy openings. Through reintroduction efforts, their native range has been established in southern and eastern African countries.

To further protect the future of rhinos, The Wilds and the Columbus Zoo has provided more than $222,000 in the last five years in support of conservation projects benefiting rhinos in their native ranges, such as monitoring black and white rhinos in Zimbabwe’s Lowveld region through the International Rhino Foundation, protecting black rhinos in the Ngulia Rhino Sanctuary in Kenya through the African Wildlife Foundation and habitat restoration focused on the shortgrass that white rhinos eat through the White Rhinos: Rhinoceros Fund Uganda.

Guests may have the opportunity to view Bing and Anan, along with the other rhinos, in the rhino barn during a Winter at The Wilds tour within the coming weeks. Tours are available at 11 a.m. and 2 p.m. through April. Reservations must be made at least 72 hours in advance. For more information, visit TheWilds.org.