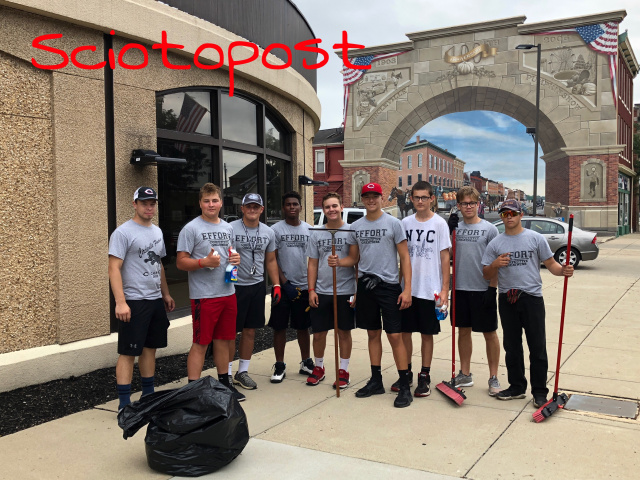 CIRCLEVILLE – August 11th Uptown Circleville with the help of many local officials, individuals, and most of the Circleville Football team helped to shine up downtown Circleville.  Armed with Brooms, buckets, and paint the group aimed to remove weeds, paint curbs and sweep sidewalks.

Sciotopost posted a flyer for the group asking for volunteers, one of the comments was, “why can’t Circleville’s Government clean this stuff up.”  The answer to that is a lot of the property that needed to be cleaned up was property owners.  Uptown said,”We want to hug the business owners, help make downtown vibrant for people. We understand that a lot of the local businesses are sometimes bustling and miss stuff.  Helping them out helps Circleville out.”

Kathleen Young Southeast regional liaison for Ohio Governor Kasich spent some time cleaning up her hometown.  “I grew up on the Fairfield/Pickaway line, and this is home to me.  During my upbringing, this was the pattern we used when we came into town.  My dad banked at First National Bank, now Chase Bank, we would start out by depositing his check then cross the street to Murphys, because they had the biggest candy counter in the whole world, it was a five and dime.  Then you worked your way down to Blocks Shoes because that’s where everyone bought their shoes.  Then where the BMV is now, that was a Jcpennys.  Then past that was the Children’s shop where we bought many of my clothes.  Then across the street Benjamin Drugs to get prescriptions.  It was all social downtown that’s how it used to be.  It was how we lived it was small town USA, and over the years we have seen the decline of the downtown because of the malls on the outskirts, but this will always be home to me.  I’m doing this on my own time this is personal.”

Circleville Tigers cleaned the streets and pulled weeds from South Court Street by the City of Circleville Building to the new Pumpkin Park and West Main from Masons Furniture to Circle City Pawn.  For lunch, they got pizza at Gibbies.