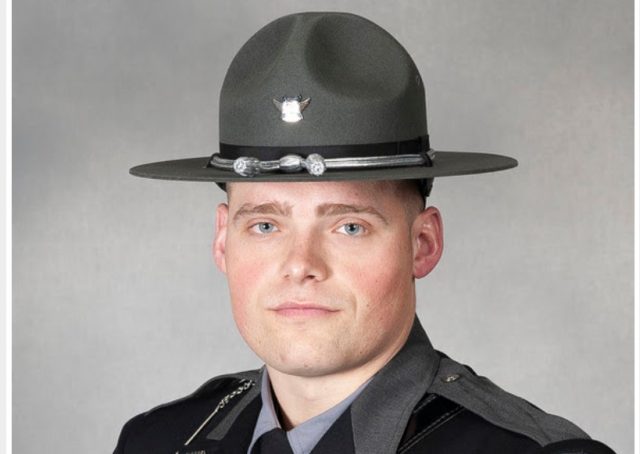 COLUMBUS – A trooper from the Granville Post of the Ohio State Highway Patrol was struck while outside his vehicle investigating a crash last night at 11:21 p.m. The injury crash occurred on Interstate 70 in Licking County.

On February 24 at approximately 9:30 p.m., troopers were dispatched to a disabled 2017 GMC U-Haul vehicle in the westbound left lane of travel on Interstate 70, near mile post 129. At 9:51 p.m., with the left lane closed, an ACDA crash occurred between two vehicles, a 2017 red GMC Acadia and a 2021 Subaru Forester, in that same area. At that time, a red 2017 international commercial vehicle wrecker from Jae’s Towing was called to the scene.

At 11:21 p.m., a 2008 white Volvo commercial tractor trailer was traveling westbound in the left lane and attempted to change lanes, striking another commercial vehicle and then Jae’s wrecker, with overhead lights activated. Subsequently, forcing Jae’s wrecker into the 2017 GMC Acadia, the 2021 Subaru Forester, Trooper Austin D. Crow and the U-Haul vehicle.

The commercial vehicle that was struck from the attempted lane change did not stop and continued driving.

One minor injury was reported from another driver involved in the crash.

All troopers on scene were wearing reflective outerwear. The crash remains under investigation.