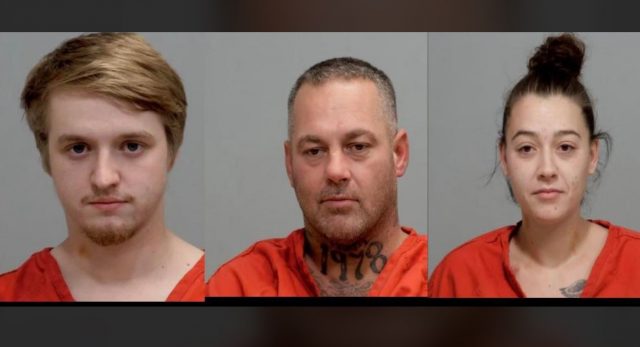 An ongoing investigation had revealed large amounts of illegal narcotics and firearms being trafficked in the city by armed and dangerous individuals(s). For the safety of the neighbors in the area and the threats of violence towards law enforcement, CPD requested Pickaway County Sheriff’s Office SRT as a secondary team. The search warrant was executed as planned and all occupants were detained without issue. A loaded handgun was found within reach of one of the individuals. Upon speaking with the occupants of the residence, detectives were told Shannon Speakman had a loaded handgun pointed at a male’s head and was threatening to kill him as officers breached the residence. While detectives were processing the residence, officers holding perimeter heard a female screaming “please stop” multiple times alongside loud banging coming from the uninvolved upstairs apartment. Officers were assigned to check on the well-being of the upstairs residents. The officers knocked on the door and were allowed inside the residence, where one of the females inside was found to be having a panic attack. This female was offered medical treatment to which she refused. The officers then cleared.

Bulk amounts of Fentanyl, Methamphetamine, Crack-Cocaine, loaded syringes, and a drug manufacturing operation were located inside the residence. The following individuals were arrested and charged:

The crime, violence, thefts, and the risk to our children that come with illegal drug traffickers have no place in our community. We would like to thank the residents that were brave enough to come forward and report this activity, as well as the Pickaway County Sheriff’s Office SRT Team, Circleville Fire Department, and Circleville Police Department SRT team.