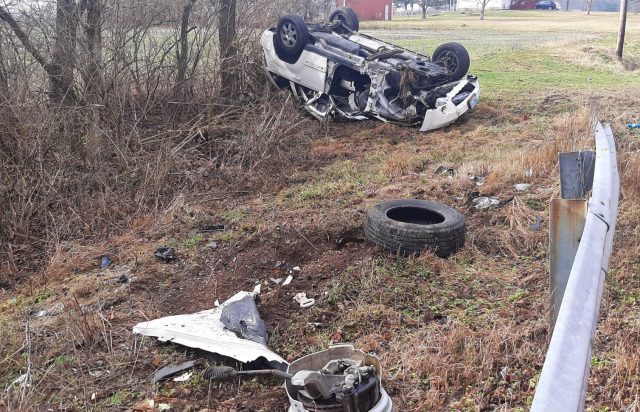 PICKAWAY – At approximately 11:00 AM the Pickaway County Sheriff’s Dept received a 911 transfer call from the Franklin County Sheriff’s Dept, however when the call was received by PCSO the caller could not be heard. Moments later it was discovered that a late model Jeep was traveling West on Lane Rd in Northern Pickaway County just West of Borror Rd when it left the roadway striking a mailbox and bagged trash. The driver who’s name has not yet been released, over corrected and crossed the East bound lane then striking a guard rail. The impact caused the Jeep to roll over before coming to a rest on its roof. A witness reported to authorities that the driver left the scene on foot walking East. Commercial Point Police and the Ohio State Highway arrived within minutes and located the vehicle and the driver.

The driver declined medical attention according to EMS personnel. OSP conducted a field sobriety test about a quarter mile East of the crash scene where the driver was located. The driver was charged with driving while impaired, failure to control and leaving the scene.