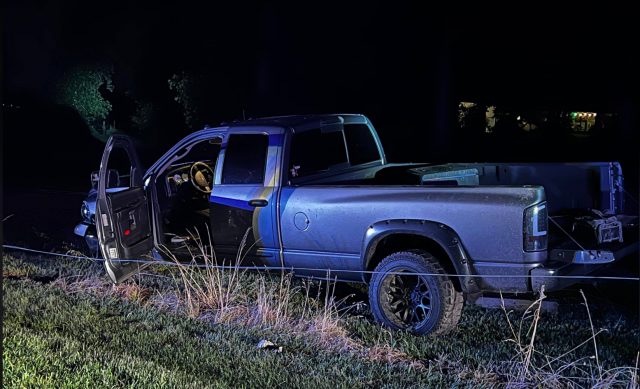 PICKAWAY – A diesel vehicle is destroyed after a chase and crash in Pickaway county.

Around 1:40 am on Sunday a call came into 911 of a silver pickup truck heading south on US-23 in the area of South Bloomfield that was all over the roadway. Pickaway County units were called to check for the vehicle. Around the area of North Court Street and US-23, Sergent Morningstar caught up to the vehicle and started to observe the driver’s driving behavior. After several infractions of crossing over the line and witnesses who had earlier stated the same, he attempted to stop the driver for a traffic stop. The driver did not stop but accelerated. The chase came down through Circleville at speeds of over 100 mph. The suspect driving a Dodge Cummins then turned into Tarlton road and pushed his truck to the limit pushing upwards of 110 mph. Morningstar an experienced officer did not chase the suspect at this point in time but followed with distance, hoping the suspect would not push dangerous speeds and cause himself to crash while calling ahead for several other units for help. The driver turned from Tarlton onto Kingston pike where he continued to speed away through the dangerous curves in the area, then onto Hayesville road, Morningstar told Sciotopost that he was able to follow him at a safe distance by following the big black puffs of smoke from the diesel engine when it made turns and accelerated.

The chase came to an end when the driver lost control around Caldwell road and left the road on the left side overcorrected then crossed over the roadway again and off the right side of the road where he lost his front tire. The vehicle than out of control crossed over the roadway for the third time and off the left side of the road where it crashed into a fence. When Morningstar arrived on the scene the suspect had already left the vehicle without his vape pen and disappeared into the darkness.