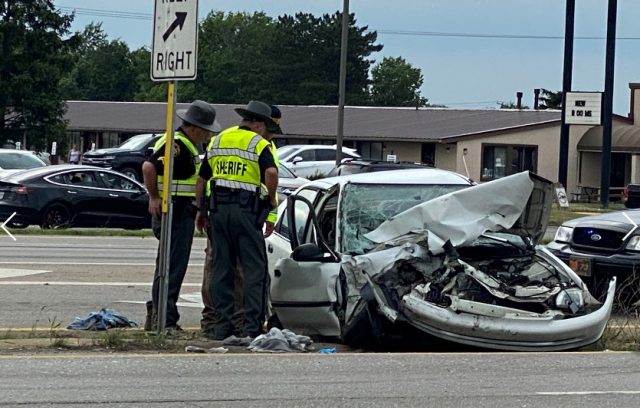 PICKAWAY – A man was critically injured after being thrown from his car in a almost head on collision around 4:35 pm on June 25, 2021.

According to the sheriff’s department, a white Honda Civic was traveling Southbound on US-23 when it attempted to turn left onto Sperry drive. A Jeep Wrangler was heading Northbound on US-23. The collision happened in the Northbound lane of US-23 in an almost head-on collision. The driver of the Honda was thrown from the vehicle, the Jeep then went on top of the civics passenger side and over the hood. The man ended up underneath the Honda on the passenger side, entrapped.

According to witnesses on the scene, three large men stopped almost immediately and before the first responders arrived on the scene they lifted the car off the injured unconscious man.

Deputies reported that the driver of the Honda was then airlifted by medical helicopter to Grant Hospital in critical condition. The driver of the jeep was transported to Berger Hospital.

Original reports said that three people were involved in the wreck but on scene reports were two.

The wreck is still under investigation with Pickaway Sheriffs office at this time on who was at fault for the incident.