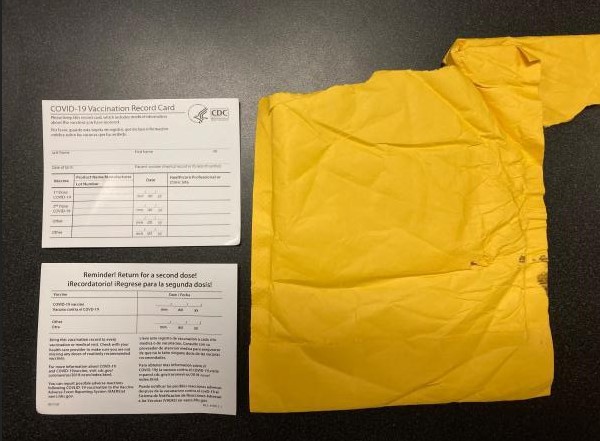 US – U.S. Customs and Border Protection Officers (CBPOs) working at the port of Memphis flagged a suspicious shipment coming from Shenzhen, China en route to the central business district of New Orleans. It was described in the manifest as “PAPER CARD, PAPER” and CBPOs already knew what it was. It was the 15th such shipment of the night. Inside were 51 low quality, counterfeit COVID-19 vaccination cards. The cards have blanks for the recipient’s name and birthdate, the vaccine maker, lot number, and date and place the shot was given, as well as the Center for Disease Control (CDC) logo in the upper right corner. However, there were typos, unfinished words, and some of the Spanish verbiage on the back was misspelled. How else did they know it was counterfeit? It was imported by a non-CDC or medical entity, and this was not the first time they had seen this shipper.

Sometimes the manifests describe the shipments as “Paper Greeting Cards/ Use For-Greeting Card,” sometimes they are “PAPER PAPER CARD,” but they are always from China. Though they may come in packs of 20, 51, 100, there are never any attempts to conceal them in anything. They aren’t hidden in books, nor are they stuffed in the back of framed paintings. The recipients of this ubiquitous contraband are unfortunately all over the United States. This fiscal year to date, Memphis has made 121 seizures totaling 3,017 of these vaccination cards.

The FBI has warned the public that buying, selling, or using a counterfeit COVID-19 vaccination card is a crime. It can be categorized as the unauthorized use of an official government agency seal (such as HHS or CDC) and may be punishable under Title 18 United States Code, Section 1017, and other applicable laws. Violators face a fine and up to five years in prison.

“These vaccinations are free and available everywhere,” said Michael Neipert, Area Port Director of Memphis. “If you do not wish to receive a vaccine, that is your decision. But don’t order a counterfeit, waste my officer’s time, break the law, and misrepresent yourself. CBP Officers at the Area Port of Memphis remain committed to stopping counterfeit smuggling and helping to protect our communities. But just know that when you order a fake vaxx card, you are using my officers time as they also seize fentanyl and methamphetamines.”