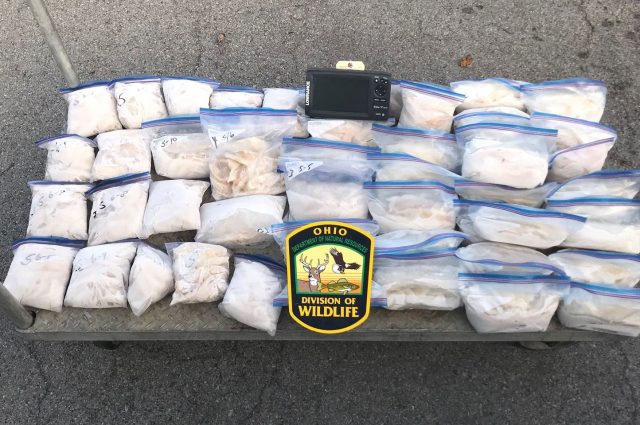 OHIO – In June of 2020, Ohio Division of Wildlife investigation began into two men, one from Florida and the other Tennessee. The men were alleged to have repeatedly exceeded their daily limit of walleye while “double-tripping” while they stayed in Oak Harbor, Ohio.

Through their investigation, Wildlife Officers discovered that the men had likely been doing this for years and avoided detection by storing their fish at a nearby residence.

At Ohio Division of Wildlife’s request, Officers with Tennessee Wildlife Resource Agency contacted one individual and seized many bags of walleye.

Ohio officers contacted the Florida man, still in Ohio, and found him to be in possession of many bags of walleye in violation of the fillet rule. After several meetings with the Ottawa County Asst. Prosecutor, they determined that each be charged as follows with the results below:

Tennessee: Person was found guilty on two charges of possession of walleye contrary to law, o $400 in fines, $552 in costs. o Ohio Fishing license suspended for 2 years.o He has 30 days of jail suspended on the condition that he be law abiding for 2 years.

Florida: Person was found guilty of two counts of possession walleye contrary to law, one count of over-limit of walleye, and the one count of the vessel registration violation, o $400 fines, $618 court costs. o $50 restitution o Ohio fishing license suspended for 2 years. o 30 days of jail suspended on the condition that he be law-abiding for 2 years.