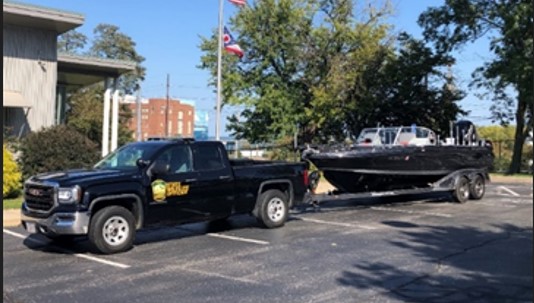 “I take all crime very seriously, and I believe what these two individuals attempted to do was not only dishonorable but also criminal”, said Prosecutor Michael C. O’Malley. “I would like to formally thank the officers with the Ohio Department of Natural Resources, the Hermitage Pennsylvania Police Department, the Mercer County District Attorney’s Office, and the Pennsylvania Fish and Boat Commission for their quick actions and their execution of a search warrant resulting in the seizure of criminal tools, including Defendant Cominsky’s boat and trailer.”

According to an investigation conducted by the Ohio Department of Natural Resources (ODNR), on September 30, 2022, Jacob Runyan and Chase Cominsky competed at the Lake Erie Walleye Trail tournament near North Marginal Road and Lakeshore Boulevard in Cleveland. The tournament hosted fishermen from several surrounding states that competed to see which team could catch five of the heaviest walleye fish in Lake Erie. If Runyan and Cominsky had won this tournament, they would have received a total prize of $28,760.

The director of the tournament noticed Runyan and Cominsky’s walleyes weighed more than they looked and sliced open the fish. Ten weights were located inside the walleyes, eight weighing 12 ounces and two weighing eight ounces along with several walleye filets. The two were immediately disqualified and instructed to leave the tournament. The Cleveland Metroparks Police Department responded to the scene.

As part of the Possessing Criminal Tools charge in this indictment, law enforcement officers with ODNR and the Hermitage Pennsylvania Police Department with assistance from the Mercer County District Attorney’s Office and the Pennsylvania Fish and Boat Commission executed a search warrant at Cominsky’s residence on Tuesday, October 11, and seized Chase Cominsky’s boat and trailer. The boat, which was used in the fishing tournament, is now in the possession of ODNR in a secure location.

The Unlawful Ownership of Wild Animals charge pertains to their possession of fish filets on their boat.  A conviction on that count may result in an indefinite suspension of their fishing licenses.

Jacob Runyan and Chase Cominsky were indicted on the following charges:

Felonies of the fifth degree are punishable up to 12 months in prison and up to $2,500 in fines.

Misdemeanors of the fourth degree are punishable up to 30 days in jail and up to $250 in fines.

Runyan and Cominsky will be arraigned at the Cuyahoga County Justice Center at a later date.

You can view the indictment here.