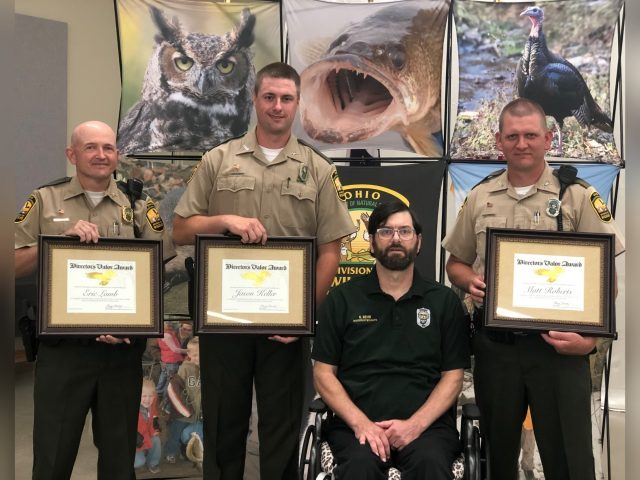 Ohio Division of Natural Resources: COLUMBUS, Ohio – Three Ohio Wildlife Officers were honored by Ohio Department of Natural Resources (ODNR) Director Mary Mertz for their lifesaving actions after Ohio Wildlife Investigator Kevin Behr was shot while on assignment in December 2020. Officers Jason Keller, Eric Lamb, and Matt Roberts were each presented with the Director’s Award of Valor at a special ceremony on June 28 to recognize their heroic actions.

“Officers Keller, Lamb, and Roberts acted quickly, decisively, and with bravery in the moments that mattered most,” said Director Mertz. “Their actions undoubtedly saved the life of Investigator Kevin Behr, and we owe a special debt of gratitude to these officers for their heroism.”

On Dec. 20, 2020, the officers were working on a law enforcement project in Clinton County after receiving reports of illegal white-tailed deer hunting activities. Investigator Behr was performing surveillance in the area when a suspect shot him. The other three officers quickly assisted Investigator Behr and are credited with saving his life.

“These three men stand as representatives of the training, dedication, and commitment to their peers, the public, and Ohio’s wildlife displayed routinely by the Division of Wildlife staff,” said Kendra Wecker, chief of the ODNR Division of Wildlife “Their work contributes to great hunting and fishing, and I applaud their dedication to public service and safety.”

Wildlife Officers Roberts, Keller, and Lamb were honored for the following actions taken on Dec. 20, 2020: