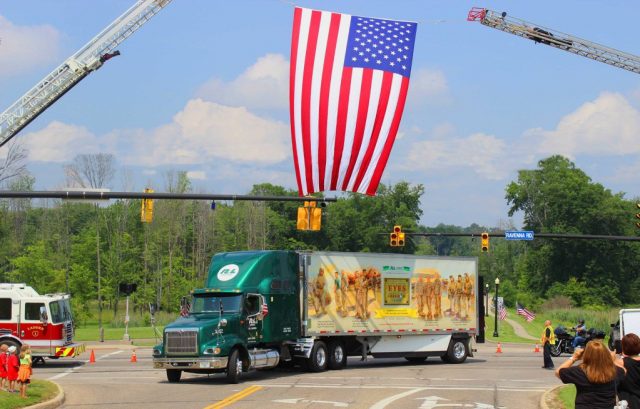 CIRCLEVILLE – The Eyes of Freedom reached out to the community after fundraising for the free traveling event struggled.

Since 2014 The Eyes of Freedom has brought its exhibit to the Circleville Pumpkin show through the hands of dedicated Navy Veteran Terry Slone who passed away in 2021, but the organization promised the family that they would attempt to continue the memorial at the Pumpkin show. The event and the program are a non/profit that relies on donations to keep the memorial moving around the country.

“Terry organized the fundraising efforts year after year for us to bring the event to the show. It’s been an amazing experience, so many veterans come year after year. It affects so many.”, said Eyes of Freedom, “Veterans from every war come in and see the life-sized murals, and it’s like they step back in time to a different place. Veterans relive the past through our memorial, and it’s been growing larger and larger every year. The pumpkin show is the largest audience we have throughout the country. This is something that we must continue that’s why we are reaching out.”

Mike Strahle from the Eyes of Freedom told Sciotopost that after our post in 2021 several local donors reached out they have secured the funds plus extra for the start of the 2022 Pumpkin show.

“Any extra that we receive this year will go towards next year,” said Eyes of Freedom.

The Eyes of Freedom will roll into town on Monday October 17, 2022 and set up at Memorial Hall located at 165 East Main Street in Circleville.