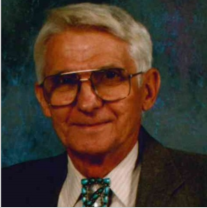 Stanley M. Eakin, age 95, went to be with the Lord on Sunday, September 24, 2017. He passed away at Mt Carmel West Hospital from pneumonia. He had broken his hip. Preceded in death by father Everett Eakin and mother Elma Eakin; and two brothers that were killed in action in World War II, Ivan Eakin and Bobby Eakin. He is survived by his beloved wife Marjorie Eakin (68 years of marriage); daughter Barbara Eakin; son Rodney Eakin; sister Jane Haynes (98 years old); and nieces, nephews and friends. Stanley retired as an entrepreneur and businessman, having owned and operated Eakin Refrigeration for over 65 years.
Stanley is a pioneer and innovator of his time. Well known for his rocket car that he designed and built, along with the making of Indian jewelry. Stanley has earned the respect, honor, and admiration of many people. Friends may call 2-4 and 6-8 PM Thursday at THE SCHOEDINGER GROVE CITY CHAPEL 3920 Broadway. FUNERAL SERVICE 11 AM Friday, Sept. 29 at the GROVE CITY CHURCH OF THE NAZARENE 4770 Hoover Rd. Pastor Owen Stotts officiating. Interment to follow at Pleasant Cemetery. In lieu of flowers the family requests donations to be made to the Humane Society and/or Rieser Foundation for the Homeless.