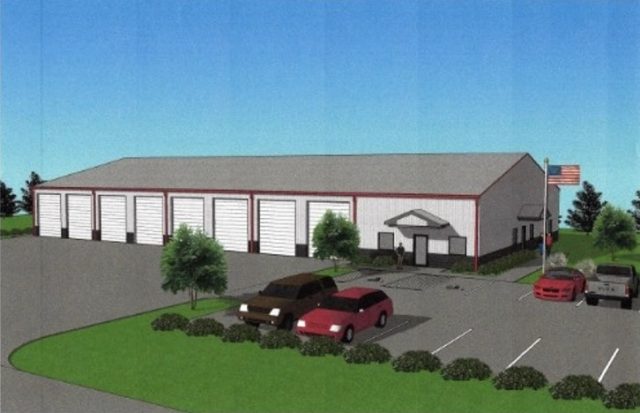 WILLIAMSPORT – Firefighters in Southwest Pickaway Fire are going to the voters this year and asking for a yes vote on a 1.8 million dollar bond issue to build the future of the local fire department.

Chief Roger Peart said that in 1982 he was sworn in inside the aging building that he now manages. The Chief said that he was drafted into Vietnam just out of high school, it wasn’t something he would have volunteered to do but, he said, “it was a life experience that I’ll always cherish. It gave me a sense of value that I needed to give back to my community. It was shortly afterward that I joined the fire department.”

The Chief told Sciotopost that the building they currently rent from Deer Creek Township that houses the emergency equipment is deteriorating. The building built in 1922 was built as a men’s club that was used as a community center for the town, it has just always been modified, and was never meant to be a firehouse.

“In fact, the high school before they built the gymnasium and played basketball in here.”

The Chief took us for a tour of the building and he pointed out that most of the back wall is leaking and water runs into the building during heavy rains. Part of the cement floors that hold the fire engine has dropped and they just have painted the cement for a tripping hazard. The Chief told us that they purchase their new engines and tankers specifically to make sure they fit into the doors since equipment continues to get bigger. The mirrors of trucks have to be folded in and the exhaust stacks have been cut down and modified to fit inside the building.

The chief says he doesn’t complain, its “A labor of love”

“This area is the apparatus bay, the kitchen area, the offices, where training happens, everything in this one little 300 sq foot room. Unfortunately, a lot of this stuff in here is literally begging borrow and steal to get. We put the exhaust system up in here. We put in the drop ceiling, we’ve had to repaint this stuff and it’s just it’s a labor of love, but it’s time for it, it’s to the point where it’s an electrical nightmare and in a structural nightmare. We’ve done a good job at getting equipment out here. The problem is, is that it’s to the point now that we can’t protect our equipment.”

The fire department already knows where to build the new structure, they have even already bought the 3.8-acre lot through fish fries and other fundraising events. Property owned by the fire department sits at the intersection of S Cedar Street and Mill Street (SR-22) across the street from Underdogs. The building planned according to the Cheif is nothing fancy but it will protect the area’s investment in equipment and push the fire department into the future. The location serves the area better being on SR-22 with a total coverage area of 94 miles.

This area includes the Village of Williamsport, all of Deercreek and Wayne Townships, half of Jackson Township and Portions of Monroe and Muhlenberg Townships. This includes the Westfall School campus: SPFD also has in its coverage area: Four State Highways that equates to over 40 miles of moderate to heavily used roadways. Approximately 3,000 homes, half of which are located in or near the village of Williamsport. Over 35 miles of waterway flow through our District, including Darby Creek, Deer Creek, and the Scioto River. The Deer Creek Reservoir is also within the mutual aid coverage area of the SPFD.

All homes, farms, schools, and businesses located in Southwest Pickaway County rely on a dedicated network of first responders to protect their lives and property. This reliance often goes unnoticed until we find ourselves in dire need. In those moments, we are thankful for our first responders who put their lives in harm’s way to help their fellow citizens.

Southwest Pickaway Fire consists of 11 volunteer members, all but two have over 12 years of experience.