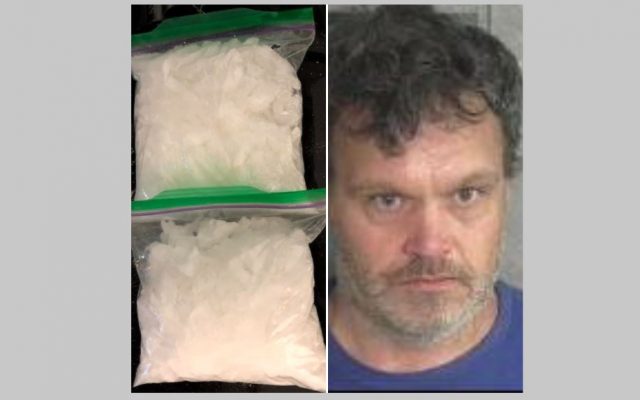 GALLIA – Gallia County Sheriff Matt Champlin says that a large quantity of drugs were seized after a successful search warrant.

Sheriff Champlin states “based upon information which was cultivated by our road patrol division, the Gallia County Sheriff’s Office received and conducted a search warrant at a residence on Safford School Road.

As a result of the search and subsequent investigation, one male has been taken into custody and will be charged with the trafficking and possession of methamphetamine. That individual is identified as Thomas C. Patrick, age 50, of Gallipolis, Ohio. As a result of the search of the residence, a very large quantity of what is suspected to be crystal methamphetamine, as well as additional narcotics were seized from the residence.

Those narcotics have been transported to the Ohio Attorney General’s Crime Lab in London, Ohio for testing. In addition to the narcotics which were seized, a large quantity of firearms were seized as well. Several of those firearms have already been confirmed through our investigation as stolen. Furthermore, over $13,000 in cash was seized from the residence which is believed to be proceeds of drug trafficking.

”Sheriff Champlin further states “We are currently furthering this investigation and consulting with Prosecutor Jason Holdren regarding additional charges. This investigation is just one more example of the continued level of professionalism and commitment that you can expect from your Gallia County Sheriff’s Office.”