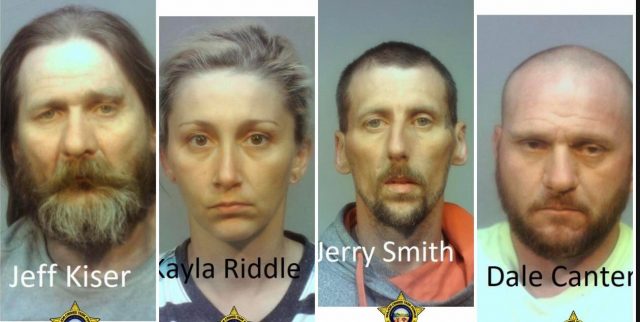 On September 27th , 2022, the Athens County Sheriff’s Office Drug Task Force, Investigators from the Athens County Prosecutor’s Office, and Agents from the Athens Office of the Ohio Adult Parole Authority responded to
the residence of Jeffrey Kiser at 10787 SR 550, Athens, for a report of drug activity, possession of the stolen property, and numerous people living on the property with warrants.

Deputies and investigators located evidence of narcotics at the scene and subsequently obtained two search warrants for the property. “Suspected methamphetamine and psilocybin mushrooms were located during the
search.” reported Sheriff Rodney Smith.

“Property crimes in our area are directly tied to the increased use of illegal drugs,” continued Athens County Prosecuting Attorney Keller Blackburn. “Working together we can target the problem and make our community
better.”

Arrested on scene and transported to the Southeastern Ohio Regional Jail were the following:

Athens County Children Services was called to the scene regarding the well-being of a child who was found in a bed near items that were seized. The Athens County Dog Warden also responded to assist with a dog suffering
from a severe foot injury and having difficulty walking.

More charges are expected to be filed in connection to this investigation. Chief Investigator Jay Barrett advises the community that “We will continue to work as a team to eradicate drugs from Athens County.”