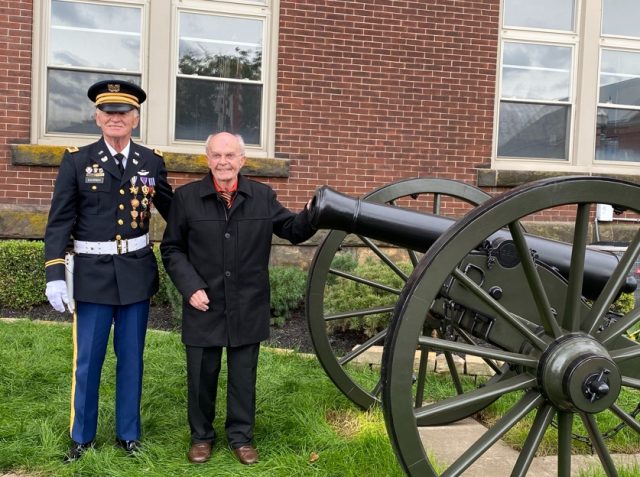 CIRCLEVILLE – Preserving History is a necessary way to ensure the future generations will be challenged to learn of things in the past. The Soldiers Monumental Association of Pickaway County, Ohio started a project in 2019 that has that goal in mind

In front of Memorial Hall at the intersection of  E. Main and S. Pickaway Street sits an 1841 6-pounder civil war cannon that was pivotal in winning several wars. The gun was used in both the Mexican-American War and the American Civil war and could fire two different kinds of shots 1,500 yards away. This cannon has sat at the location for many years.

In 2019 Soldiers Monumental Association moved forward with plans to revitalize the cannon reaching out for personal donations from local interests. A total of 1`6,000 dollars was needed to restore the cannon.

According to Sid Liming of Soldiers Monumental Association on February 21st, the cannon was removed from its resting spot sent for restoration. Calls made during the next few months were difficult when the Association found out that the war cannon wasn’t genuine, neither was the carriage that supported it.

“The plan was always to replace the carriage that held the cannon,” said Sid Liming, “We didn’t know the canon wasn’t correct, so we made the decision to purchase a replica.”

The wheels were correct though Sid said and the Association was able to sell them to someone who will use them for a period-correct piece.

“The new cannon is made of a long-lasting material that will be around for a very long time,” said Sid.

State Representative Stewart; Judges Peters and Harsha; retired Judges Harsha and Dumm; and Treasurer Elick were in attendance at the ceremony.

Pickaway Treasurer Ellery Elick was a supporter of the cause, “Both my wife Pam and I had parents who were veterans of World War II, my father was a prisoner of war during The Battle of the Bulge, and her father was injured. Both received the Purple Heart for their service. When Glen told us about this project we felt like this was a great worthwhile cause and something the county could be very proud of and it will be here for a long time to come.”

The unveiling of the cannon was filmed live by Sciotopost to watch click here: https://fb.watch/8hX6yhyH3Y/