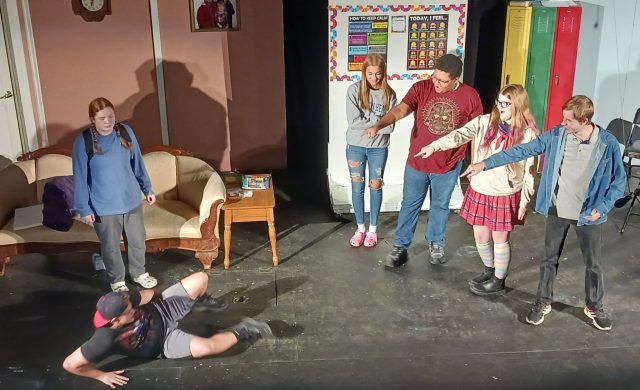 In most cases, plays and musicals are written and produced for entertainment. A quick joke. A little jazz. A jaunty dance. Roundtown Players, Circleville’s very own Community Theatre, has been entertaining the masses since the mid ‘60’s. They are no strangers to laughter and applause. Sometimes their shows go beyond entertaining, though. Sometimes, they invoke feelings. Sometimes, they encourage discussion and broaden minds. RTP’s current production, Mockingbird, is no exception. According to the show’s Director, Megan Gotham, “Mockingbird is about 11-year-old Caitlin, who just lost her brother, but she’s not grieving as expected because she has Autism, so the play follows Caitlin trying to navigate the world without her brother, who used to guide her through socially acceptable behaviors, and how Caitlin’s relationship with her father changes through this loss.

I picked this show because two of my three children are Autistic, and it is very difficult to find any type of media that portrays Autism in a respectful way, let alone an accurate way, and Mockingbird handled the scenario of a young girl with Autism (a demographic that often goes undiagnosed) very respectfully.”

Autism, at times, can be very misunderstood, even though it’s very likely that all of us know someone who has Autism or has been impacted by Autism. According to 2016 data, CDC reported in 2020 that around 1 in 54 children in the United States is diagnosed with an autism spectrum disorder.  After doing some research online for information about Autism, this can be found- “Autism spectrum disorder (ASD) is a neurological and developmental disorder that affects how people interact with others, communicate, learn, and behave. Although autism can be diagnosed at any age, it is described as a “developmental disorder” because symptoms generally appear in the first two years of life.” (https://www.nimh.nih.gov/health/topics/autism-spectrum-disorders)

As reported by parents during a study conducted between 2009 to 2017, approximately 1 in 6 children between the ages of 3 to 17 (17%) were diagnosed with a developmental disability. These developmental disabilities include autism, attention-deficit/hyperactivity disorder, cerebral palsy, blindness and others. (https://otsimo.com/en/autism-facts-vaccines/)

Per Dramatic Publishing’s website, “Caitlin is an 11-year-old girl on the autism spectrum. Not all things make sense to her. Emotions are mysterious and voices are almost always too loud. Suddenly, she must grapple with the unthinkable: a mass shooting has taken her brother away. He was the one person who helped her cope. Now she is alone with her grieving father and a cacophony of children at school. She struggles to understand empathy, what facial expressions mean and why a drawing might have more than one color. We see the world from Caitlin’s point of view. We struggle as she does. We also take comfort in the times when she finds a friend, draws a multicolored mockingbird and can finally cry for her brother.” (https://www.dramaticpublishing.com/mockingbird?fbclid=IwAR20I86xCq7Huh2wMxW0rold6Tyq5-zgc_mB6U4Fjio1QtLt8gC2XmAX2mE)

***After I read that there was mention of a mass shooting in the synopsis, I asked about it and it was made clear by Director Gotham that there is no gun violence depicted during the show. Much of the plot does revolve around discussions about the shooting, so this content may be triggering for some audience members.***

When asked about her thoughts on the show, cast member Della Layton said, “Mockingbird has been a rough and rewarding play to work on. The subject matter is strong and has brought at least myself, but I am sure most of us, to tears at some point while working on it.” To the readers of this article, she added, “ We would love for you to come out Saturday or Sunday and see a different perspective on things.”

Cast member Chuck Bennett  said, “It is my first show with RTP. This is a very serious show and I get to stretch myself. The greatest compliment I’ve received is that I made people cry when I meant to. Mockingbird deals with some serious, relevant topics and has opened my eyes to the realities of having to deal with life after the death of a loved one. I have been through that myself, a lot, but to see it through the eyes of an eleven year old autistic girl is startling and heartbreaking.

I have thoroughly enjoyed getting to know the other actors and seeing their talent shine. They are an amazing group of people and I look forward to working with them again,” said Bennett.

When asked about his involvement with RTP, Bennett said, “My wife and I are directing the next show, You Can’t Take It With You, and then a children’s show in the spring.” Bennett shared that anyone interested in auditioning for the next production can send any inquiries to Roundtown Players. Auditions are August 28-29 from 6-8 pm, at the theatre. If needed, callbacks will be August 30 from 6-8 pm

Tickets are available at the box office, 30 minutes before the show starts, or online at: https://www.eventbrite.com/e/mockingbird-by-julie-jensen-tickets-354031627127?fs=e&s=cl&fs=e&s=cl