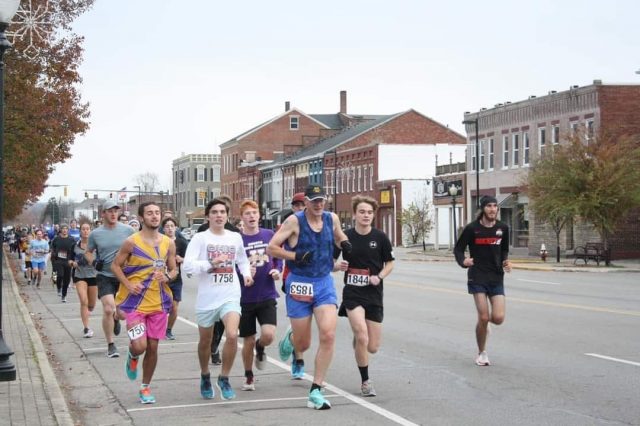 ROSS – A Unioto High School teacher says that he’s been blessed with a lot in his life and wanted to take his lifelong love of running to the next level and find a way to give back.

Matt Paxton a high school teacher at Unioto High School who has also served as a track and cross country coach there for over 20 years, has been a long-distance runner himself for a lifetime.

Paxton said that when COVID hit in 2020 he started running a lot of miles to get back into racing shape during the pandemic, it was one of the first times he was able to focus his own skills instead of coaching a team of athletes daily since the 1990s. Paxton says that he lost fifty pounds and was able to qualify for the Boston Marathon in April.

The qualification wasn’t without work though, his first attempt failed when he didn’t qualify by 3 minutes, but he coached himself into trying again. This time he was able to push himself to qualify a time 10 minutes faster than his previous attempt.

“Since I have been there before, and may not make it back again, said Paxton, “I thought I should do something to give back to the running community and the community in general. I have been blessed with a lot in my life and want to give back this time around. This is when I decided to seek a spot on Team Hoyt.”

Team Hoyt is an amazing charity team founded by Dick Hoyt, that’s based on lifetime advocacy for people with disabilities.

In the spring of 1977, Team Hoyt began when Rick asked his father if they could run in a race together to benefit a lacrosse player at his school who had become paralyzed. He wanted to prove that life went on no matter your disability. One problem: Dick was not a runner, and was 36 years old. Great fathers, however, make sacrifices. Great fathers give up their time, money, and physical energy for the sake of giving their children a better life, or sometimes, merely a smile. Dick may not have been a runner, but as a great father, his son’s request was all the motivation he needed. He agreed and pushed his son’s wheelchair the full five miles. That night, Rick told his father, “Dad, when I’m running, it feels like I’m not handicapped.”

After that significant race in history, the duo went on to run 1,130 endurance events, including 72 marathons and six Ironman Triathlons. They had run the Boston Marathon 32 times, along with other events. In 2020 Dick passed away at the age of 80, but he left behind a charity that aspires to build the individual character, self-confidence, and self-esteem of America’s disabled young people through inclusion in all facets of daily life. The charity has even spawned other charities based on the message of inclusion promoted by team Hoyt.

“I was amazed that they selected me but they did,” said Paxton, “Why Team Hoyt? Because this is a very special cause for me. Team Hoyt raises money to provide opportunities for those with disabilities for inclusion in all aspects of daily life with a focus on sport and on our youth. As a member of the OATCCC board, I watched as several of our board members, especially Dave Kirk fight for the inclusion of the seated events in the State Track Championships. This inclusion allowed me to meet and see the effect this participation made for these young men and women.
Some of you also remember Unioto’s recent National Champion Paralympic athlete Eric Hacker. Through coaching Eric and seeing the work the people involved with these events do for the physically challenged community, I have developed an appreciation for those that make these events happen that I cannot express adequately. Working with these people and groups, and seeing the difference they are making encouraged me to try to do something to give back more myself. Team Hoyt shows that even the most physically limited members of society CAN be included in activities as demanding as marathons and even ironman triathlons. They focus on paired athletes, but the foundation advocates for inclusion of all athletes in every aspect of daily life and in their communities. The Hoyt Foundation aspires to build the individual character, self-confidence, and self-esteem of America’s disabled young people through inclusion in all facets of daily life, including in family and community activities, especially sports, at home, in schools, and in the workplace. I am so honored they are letting me run on the team this year.”

Paxton shared a link to donate to him if you would like to share, it would help him to raise money to help them: https://www.givengain.com/…/unioto-distance-raising…/