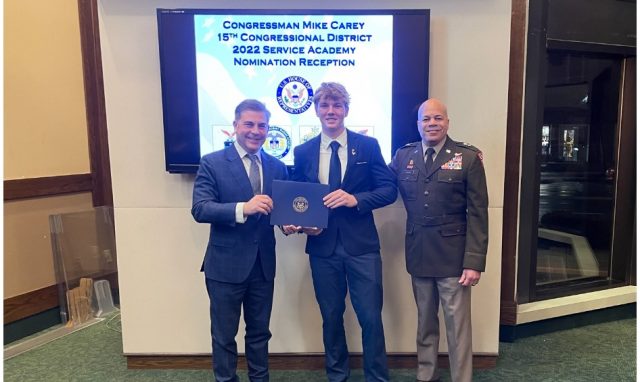 “One of the greatest honors I have as a congressman is to nominate ambitious young men and women across Ohio’s 15th Congressional District to the United States Service Academies,” said Rep. Carey. “It is encouraging to see a younger generation with a drive to serve their country and, having spent time with these students and having learned of their accomplishments, I feel rest assured that the future of our military is in great hands.”

In pursuit of a nomination to a U.S. military academy, students submit their application and are interviewed by Congressman Carey’s Military Academy Review Board. The Board evaluates the students on academic performance, leadership ability, and community involvement.

The 2022 Military Academy Review Board consisted of 10 members:

To receive a service academy nomination from Congressman Carey, candidates must be an unmarried resident of Ohio’s 15th Congressional District, a United States citizen, and between the ages of 17 and 23. Qualified persons interested in pursuing a nomination to one of the United States Service Academies should visit www.carey.house.gov for more information or contact Congressman Carey’s office at (614) 927-6902.