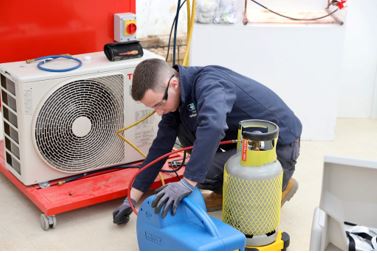 Refrigerants are vital for any air conditioning or refrigeration system due to their properties that allow them to absorb and release heat during evaporation. However, many refrigerants have a huge negative effect on the environment due to their contribution to ozone layer depletion and global warming. For this reason, many countries around the world prohibit the use and transportation of harmful refrigerants in their territories. Nevertheless, illegal importation of refrigerants takes place and negatively impacts the market and environment.

The Bulgarian Customs Agency recently seized 977 cylinders of R404A and R410A refrigerants from a Serbian shipment in 2017, falsely documented as containing isobutane. The seized refrigerants are not only harmful to the environment but were also contained in illegal disposable cylinders that cannot be refilled. Such containers are against European Union laws, which only allow the importation of reusable containers.

While similar incidents also happen in the United States, the U.S. still allows many HFC refrigerants, which keeps the prices of some of these refrigerants relatively low.

The Concerns of Refrigerant Manufacturers

According to the American HFC Coalition, which includes manufacturers such as Chemours, Honeywell, and Mexichem Fluor, many illegal importers of Chinese refrigerants are evading U.S. antidumping laws by using creative strategies like the manipulation of documents and packaging labels. Manufacturers are also concerned about the purity and quality of these illegal refrigerants, as they can negatively affect the reliability and performance of HVAC equipment and cause harm to technicians during regular service or equipment repairs. Moreover, there’s no easy way to determine whether refrigerants are legal or not.

Decisions of Governments and Agencies

After the refrigerants were seized in Bulgaria, authorities attempted to auction them for legal use in other countries. However, purchase and exportation were difficult, as such refrigerants are already available in those countries. The proposed sale of the harmful refrigerants also angered many members of the air conditioning and refrigeration community.

As a result, the Bulgarian Customs Agency decided to destroy the seized refrigerants according to the necessary environmental requirements. In addition, other governments impose fines on truck drivers who transport illegal refrigerants, but there will always be drivers who are willing to take the risk.

The illegal importation of refrigerants not only threatens the U.S. industry but can lead to other hazardous effects such as damage to your HVAC equipment or harm to the technicians working on it.

As a consumer, you should ensure that the installation of a new HVAC system follows international safety standards for your safety and for a safer environment, as well. Primarily, it’s important to use a trusted brand of HVAC equipment that uses a safe and eco-friendly refrigerant. You should also have your equipment installed and serviced by licensed HVAC professionals, such as Thermacon Service Company. In this way, you take some simple yet efficient steps toward saving the environment and protecting those who come into contact with your system.

Battle climate change and protect you and your loved ones from any hazardous effects of unauthorized refrigerants by keeping your HVAC system up to date.