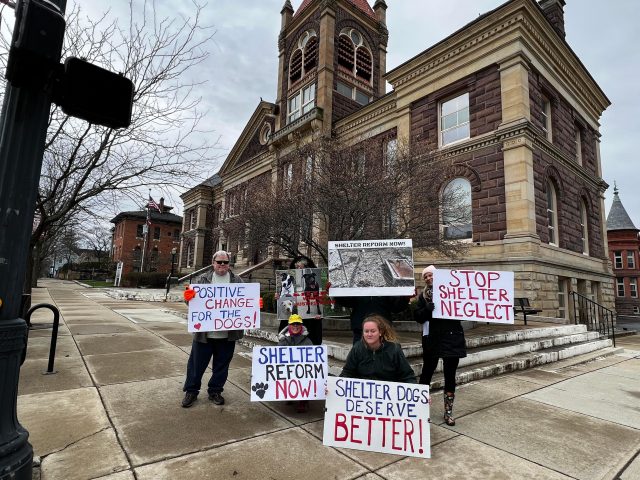 PICKAWAY – This morning around a half dozen people with signs stood on the Pickaway Court House property asking for reform of the Pickaway Dog Shelter.

Protesters who said they are currently or have been volunteers at the shelter are asking for awareness of things they wanted to see change.

“We want more advocacy for the dogs in the shelter, more online postings to help find older dogs new homes. Puppies come in and they are adopted quickly but older dogs need more advocacy,” said the group, “its not good for dogs to stay in pens at the shelter for years we want those dogs to go to foster homes, to be cared for better.”

The group also said that they would like to see every animal at the shelter neutered before adopting out.

“We feel this is the best thing to do to keep populations down, help with temperaments of the animals, and care while they are in the shelter during heat times.”

Protesters also complained and had photos of the dog cages that in their opinion were not well taken care of.

“We would like to see the dogs’ cages cleaned more often, sometimes feces is in the cages for days maybe even a week before it’s cleaned up. We volunteer out at the shelter but we normally haven’t been part of the clean-up crews there, we mostly walk the dogs and socialize with them because we feel that’s most important for the dogs.”

Their final demand was that they would like to see the Pickaway Shelter work with more foster groups to keep older dogs out of the shelter pens and in homes.