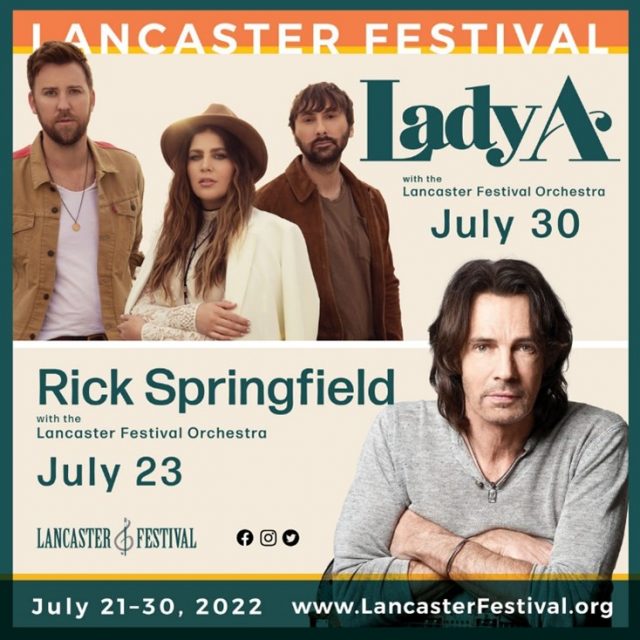 LANCASTER, Ohio (April 4, 2022) – Today the Lancaster Festival Board of Directors announced that Lady A and Rick Springfield will be this year’s signature acts appearing on the Wendel Concert Stage at the Ohio University Lancaster Campus. Tickets are now on sale for these and other events taking place during the 10-day celebration of music, art and community.

The July 30 Grand Finale concert will feature Lady A, with the Lancaster Festival Orchestra opening the evening with selections that highlight the 35th anniversary of the orchestra’s creation.  Over the course of their decade-plus career, Lady A has become one of the 21st century’s premier vocal groups, blending deeply felt emotions with classic Country sounds. As a Country-radio staple, the trio has amassed record-breaking success ushering in 10 No. One hits with more than 18 million album units and 34 million tracks sold and nearly 5 billion digital streams. Together, Charles Kelley, Dave Haywood and Hillary Scott have earned ACM and CMA “Vocal Group of the Year” trophies three years in a row and countless other honors including seven GRAMMY awards, Billboard Music Awards, People’s Choice Awards, Teen Choice Awards and a Tony Award nod.

The July 23rd concert will feature Rick Springfield with the Lancaster Festival Orchestra. Over the past four decades, Rick Springfield has worn many hats as an entertainer and performer. The creator of some of the finest power-pop of the ’80s, a Grammy Award-winning singer, songwriter, and musician who has sold 25 million albums and scored 17 U.S. Top 40 hits. His achievements also include accolades as an actor and author, including a star on the Hollywood Walk of Fame and spots on the New York Times Best Sellers’ list. In 2019, Springfield released his 17th studio album, “Orchestrating My Life,” a career-defining re-visitation of a lifetime of hits from the Australian-born rocker accompanied by a full orchestra. The Lancaster Festival performance is part of Rick’s tour playing with symphony orchestras throughout the US and world.

Dazzling fireworks will cap off each Saturday evening performance.

Other Festival highlights this year will include: