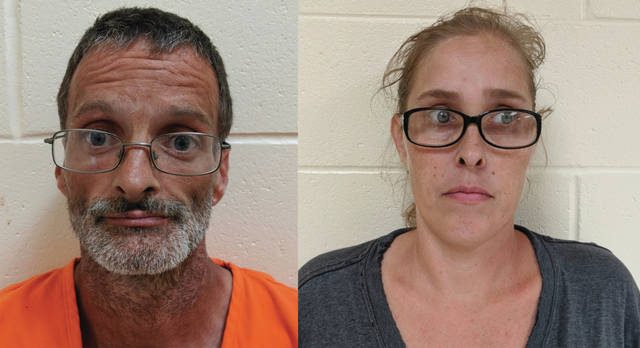 From an earlier news release early this morning NBPD received an call from the SOMC Emergency Room that a female child age 5 was brought into the emergency room with injuries and shortly there after the child was life flighted to Nationwide Children’s Hospital in Columbus where the child died at 10:47pm on July 8th. Since NBPD received the call from SOMC, NBPD along with the Scioto County Prosecutor’s Office with assistant from Investigators from the County Prosecutor and from the Scioto County Sheriff’s Office Detective Conkel have been working on this case.

Today July 9th, several key witnesses to this investigation was interviewed by Det. Conkel and through those interviews information was obtained that lead to the arrest of two persons at 9:21pm. Richard Greene age 46 of 220 Ohio Avenue in New Boston and his wife Sonya Greene age 38 of 220 Ohio Avenue have been arrested and charged with Aggravated Murder a felony in first degree, Murder B a felony in the first degree, 3 counts of felony assault all felonies in the second degree, and 3 counts of Endangering a Child a felony in the third degree. Richard and Sonya Greene was lodged in the Scioto County Jail and will appear Friday morning at Portsmouth Municipal Court on the charges.

The Greene’s are the grandparents of the dead victim 5yr old female child. Richard Greene is the biological grandfather to the child and Sonya Greene would be a step grandmother. The victim child was living with the Greene’s at that address because Scioto County Children Services had placed the victim child and two other male siblings age 7 and age 3 into the foster care of the Greene’s. Information obtained said that the children had been living with the Greene’s for about a month and a half, since around May 18th.

Since this is still an active investigation and more people will be interviewed that might have further information about this case, NBPD will only say at this time the victim female child had multiple injuries’ and bruising about her body and head area that were consistent with being physically abused and hurt that lead to the victim child’s death.

As Chief of Police for NBPD I would like our citizens to know that the persons who are responsible for the injuries’ and death of this child is behind cell bars at the Scioto County Jail and if it were not for the investigative efforts of Captain Robert Deerfield NBPD, County Prosecutor’s Investigators Jim Charles and Carl Compton and Detective Jodi Conkel this case would have not been solved quickly and no arrest might of not happened. Also the Medical Staffs from Southern Medical Center and Nationwide Children Hospital had done everything they could have done to help save this child and we thank them for their cooperation during this investigation. I can not think of a more horrific crime to be committed then the killing of an innocent 5 year old child. I believe this has emotionally affected everyone involved in this case.

After this release Scioto County Prosecutor Shane Tieman will be the only representative to make any further statement or releases about this case. All inquires should be made to Prosecutor Tieman’s office.