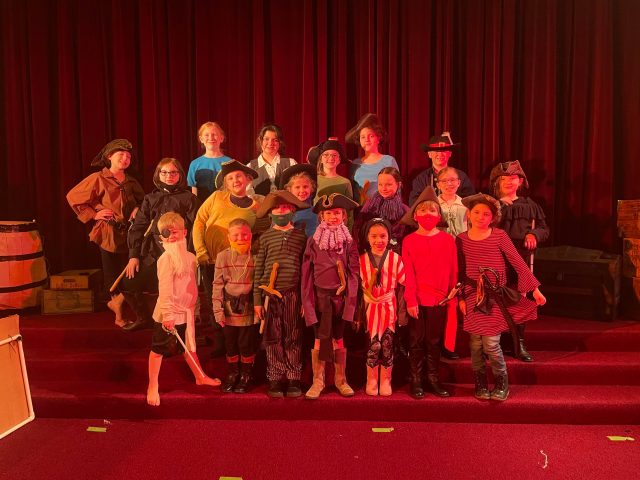 Pirates are invading the Masonic Lodge in Lancaster this weekend as Rise Up Arts Alliance’s production of Pirates! The Musical opens this Friday.  The Musical takes place on a pirate ship where a stowaway, who longs to become a pirate, has been discovered and the pirates aren’t too happy about it. They know the only one to decide what to do with the stowaway is their leader, the King of the High Cs.

At the helm of this adorable production is Director, Judith Cosgray. Pirates! Cosgray says, “We chose Pirates! because of the fun factor that would interest both boys and girls in the musical. It is designed for an educational setting so it is a perfect way to introduce the stage to new students. Since it is only 30 minutes in length, it isn’t overly intimidating for elementary students either.” She went on to say, “We really want to ease the students into the theatrical process in a positive way. By teaching them theatre basics and terminology, we can prepare them for the next  step for bigger roles in the next show.”

Cosgray decided to split the performances between two versions of the cast, Cast A and Cast B, thus giving all of the kids involved a chance to speak. The cast consists of 18 young actors, ranging from age six to 12. Performer Emma Masters said, “What I like about the show is, well, my character and the people there. They are really nice and they are creative like me.” Masters is looking forward to playing her first role ever as the King of the High Cs, Cast A. “Being in a crowd- being practiced in a crowd- I think it’s going to really help me with the life I’m going to lead.” Cast member Liam Dasal (Whitebeard, Cast A) said, “I think people should come see the play because, well, I think they’d enjoy it and everyone needs old school entertainment every now and then.”

Rise Up Arts Alliance is partnering with the Lancaster Masonic Lodge #57 to present this musical. “The Lancaster Masonic Lodge #57 has been so gracious and welcoming to our youth theatre. We would not have had a location to present this production without their help. We hope this is the foundation of a wonderful partnership in the future,” says Cosgray.

You can purchase ticket at this link: https://www.simpletix.com/e/pirates-the-musical-tickets-101536?fbclid=IwAR1uIJb0Vt-lMY2nAxAzhsBQIB0Cb8lFNHM5ONYN2ZmPipb8xqTpWLbPSG4