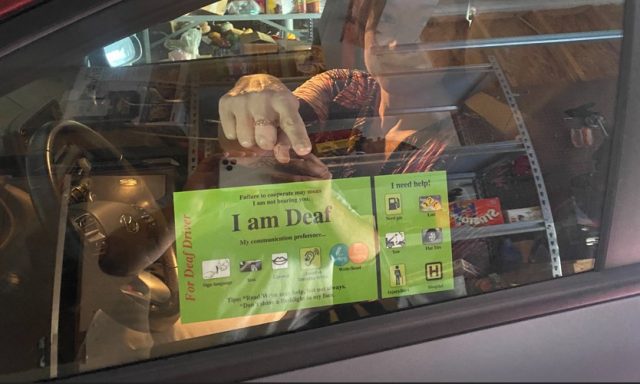 PICKAWAY – According to a National study 2.2 people out of 1,000 are deaf in the US, a higher percentile is hard of hearing. Pickaway Law enforcement is aiming to bridge the gap with this population through specialized training.

Pickaway County Sheriff Matthew Hafey said that he was recently approached by a local Pickaway county man who is hearing impaired and had a negative interactive with law enforcement and wanted to bring the situation to light to educate local law enforcement on how to better work with people who are of the deaf community.

Sheriff Hafey took that education to heart and reached out to Columbus police Advance Training Unit Officer Missy Pagnanelli for help in the education of law enforcement in Pickaway County.

“Providing this training will hopefully educate the officers, so when they encounter someone who is hard of hearing or hearing impaired to say, ok this person is hearing impaired we need to handle this interaction differently. Hearing-impaired individuals sometimes do not communicate the same even when they write things down on pieces of paper their languages have different sentence structures and the way they speak to people is different.

This education will put another tool in the tool belt for officers to have a more positive interaction and communicate better with a hearing-impaired person, aimed at having a successful outcome where everyone gets home safe.”

Columbus police Advance Training Unit Ofc. Missy Pagnanell told Sciotopost that they have started working with an organization called Dwave or (Deaf world against violence everywhere) a deaf advocacy group. One item that they worked together on is a placard to place in your visor that can be used during a stop to identify that individuals that have different communications skills.

“If someone does have a communication disability whether it be deafness, autism spectrum, or Cerebral Palsy if they are a driver or a passenger in a vehicle they can register that particular vehicle with the BMV, so when an officer is behind a vehicle and while running that tag there’s a flag that would come up saying that a person in this vehicle may have a communication disability. So the officers have that awareness going into the stop.”

The special placard was created by Franklin county and Dwave with special icons to help communications between officers and people with these disabilities. On the placard it has proof of insurance photo, conceal carry permit, the reason for the violation, I need a gas, hospital, and other pointable quick help statements to help with the interaction.

Pickaway County Sheriff says that the placards are available at the sheriff’s office for individuals with that need. There is no cost of the placard or registering at the BMV.