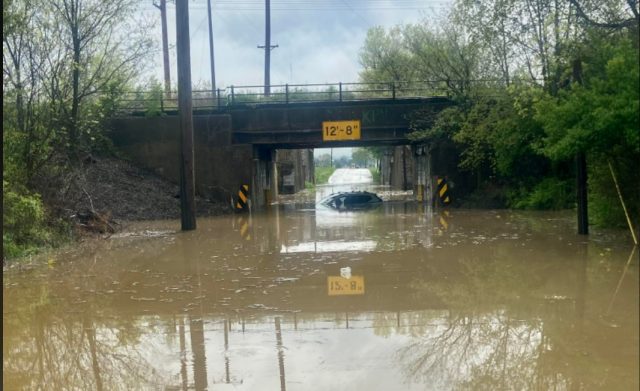 PICKAWAY – Hagerty Road was closed around 9 am this morning due to heavy rains in the area and flooding that was occurring in the underpass.

Signs were installed in the area letting drivers know of the slowly climbing waters underneath the railroad bridge, at 9 am Pickaway sheriff reported that waters had reached around a foot and a half.

Emergency crews were dispatched around 9:45 am to Hagerty road for a driver who was stuck inside her car in the flooding waters. Shortly afterward the woman was able to get out of the vehicle and swim to safety. Emergency crews arrived on the scene and the woman did not have any injuries from the incident.

According to responders, the flooding waters reached around 5 feet in depth and completely submerged the 2017 Nissan Rogue in water. Scioto Valley wrecker service had to swim into the waters to hook the vehicle and tow it out of the water.

The driver was issued a ticket for driving around the detour signage. The car is considered a total loss.