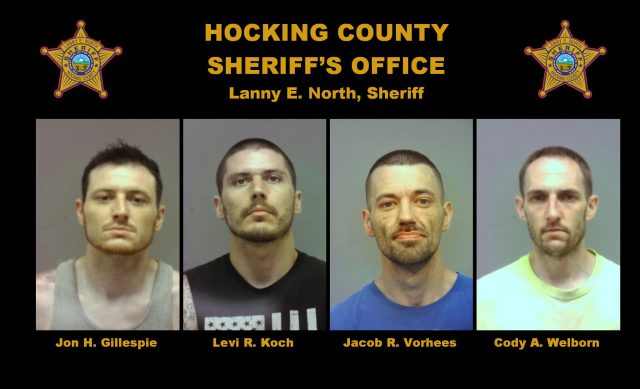 On Monday, August 24th, Hocking County EMS and Sheriff’s Office deputies were dispatched to a possible drug overdose at a residence on State Route 664N. The caller stated there was an unresponsive male sitting in the driver seat of a running vehicle in the driveway.

EMS medics arrived on scene first and when they went to check on the male, he woke up and fled on foot. Deputies arrived a short time later and requested assistance from the Hocking County Sheriff’s Interdiction Unit. Deputies and detectives searched the area but were unable to locate the male.

As investigators looked in the car, they found a large amount of suspected narcotics inside.

Detectives were able to positively identify the male as Levi R. Koch, 29 of Logan, and filed a warrant for his arrest.

Additional charges are likely to be presented to the Hocking County Grand Jury when lab results of the suspected narcotics are received from the BCI Crime Lab.

On Thursday, August 27th, investigators were able to establish probable cause that the occupants of the same residence were involved in a breaking and entering and theft offense which occurred on Clay Lick Road earlier in the month.

Members of the Hocking County Sheriff’s Office Detective Bureau and Sheriff’s Interdiction Unit obtained a search warrant and executed it at the residence.

The search warrant resulted in the seizure of a large amount of stolen property, suspected narcotics and an active methamphetamine laboratory.

Levi R. Koch, was found at the residence and arrested on the warrant filed from the incident which occurred on August 24th.

Jacob R. Vorhees, 34 of Logan, was arrested and charged with Breaking and Entering, a 5th Degree Felony.

Cody A. Welborn, 30 of Logan, was arrested in Morgan County, and charged with Breaking and Entering, a Felony of the 5th Degree.

Jon. H. Gillespie, 29 of Logan, was arrested and charged with Breaking and Entering, a 5th Degree Felony.

Additional charges are likely to be presented to the Hocking County Grand Jury at the conclusion of the investigation.