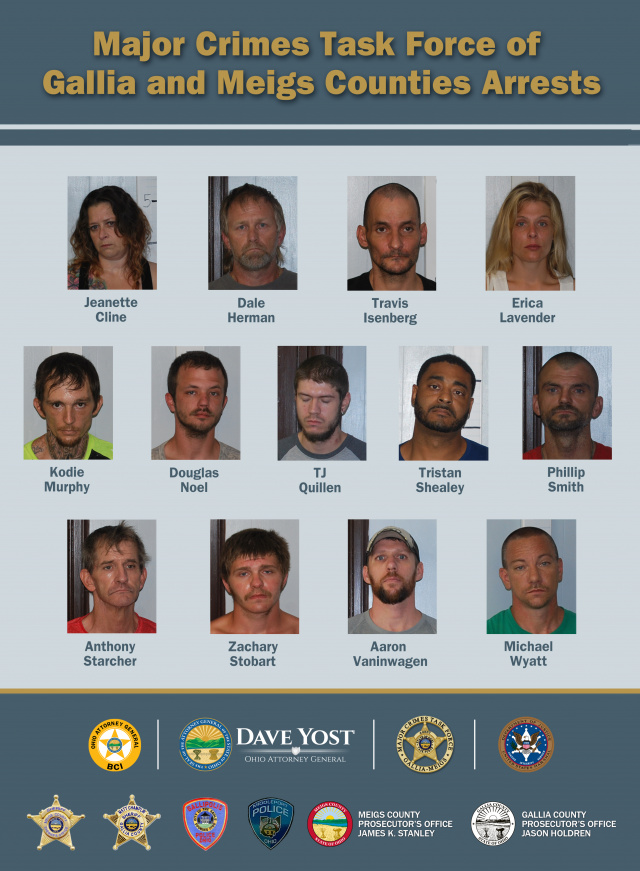 “This task force turned up the heat on drug traffickers – coordinated roundups like this one effectively eradicate dealers and scramble operating patterns,” Yost said.

“The U.S. Marshal’s Task Force is happy to partner with the Meigs and Gallia Task Force to assist them in this operation,” Tobin said. “We’re always ready to take fugitives and drug traffickers off the streets to make the community safer.”

Twelve suspects were taken into custody Thursday as part of an investigation by the Major Crime Task Force of Gallia and Meigs Counties, which is part of Attorney General Yost’s Organized Crime Investigations Commission (OOCIC). The task force includes the Meigs and Gallia county sheriff’s offices and prosecutor’s offices, the Gallipolis Police Department, the Middleport Police Department and the Ohio Attorney General’s Bureau of Criminal Investigations. The U.S. Marshal’s Service assisted with the arrests.

“Our law enforcement officers worked hard investigating the crimes of these defendants and have removed many of the biggest drug dealers from our community,” said Meigs County Prosecutor James Stanley. “These defendants no longer prey upon the weakest among us. Meigs County is much safer today because of the efforts of our officers.”

“I am proud of our Task Force for their efforts in securing the indictments for these individuals,” said Meigs County Sheriff Keith Woods. “We have received the public’s complaints on these drug dealers and we have responded with their arrests. If you live in Meigs County and you’re dealing drugs in our backyard, you will be caught and you will be prosecuted.”

The individuals below were indicted by a Meigs County grand jury:

Indictments merely contain allegations and a defendant is presumed innocent unless proven guilty in a court of law.