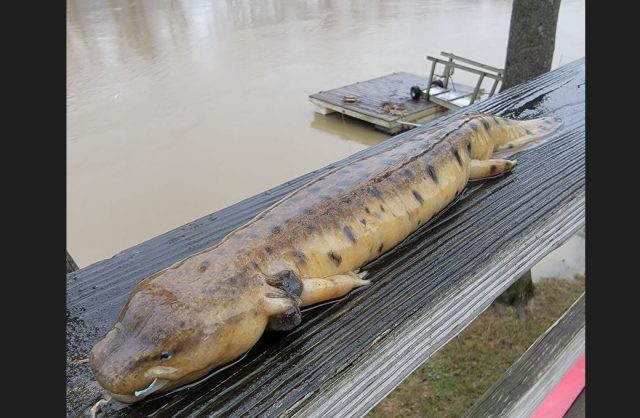 Mudpuppies are between 20 and 33 cm in length. They are entirely aquatic and have large, maroon-colored gills throughout their life. Mudpuppys (Necturus maculosus) prefer a habitat of deep, muddy water in large rivers, streams, and ponds. They are nocturnal. For these reasons, they are rarely seen. If you were to see a mudpuppy, it would make quite an impression. It has a broad, flat head, square nose, and very small eyes. The most noticeable features are the red bushy gills on both sides of its neck. Gills are normally found on larval forms of amphibians, but the adult mudpuppy keeps these gills.

Like the hellbender, their looks are deceiving. Mudpuppies are harmless.

The breeding cycle of the mudpuppy is also very different, Males during courtship typically in the fall, will deposit a small plug of sperm on the substrate, and the female will pick it up with a specialized storage organ and store it inside herself. She will hold this until the spring when she will fertilize her eggs in the spring. She will then kick out the male from the nest and hang the eggs from the nest ceiling. About 20-200 eggs are produced. The female will stay with the eggs until they hatch.

When the next life cycle starts mudpuppies are small at less than an inch, and it will take them up to six years to reach sexual maturity. Mudpuppies live around twenty years of age.

Threats to the Mudpuppy include loss and alteration of habitat, degradation of water quality, pollution, siltation, and lampricide use. While Mudpuppies are apparently tolerant of some siltation, habitat modification activities such as river channelization, dams, shoreline development, and dredging can bury rocks, logs, or other types of cover necessary for refuge and nesting. Mudpuppies are not considered endangered in Ohio