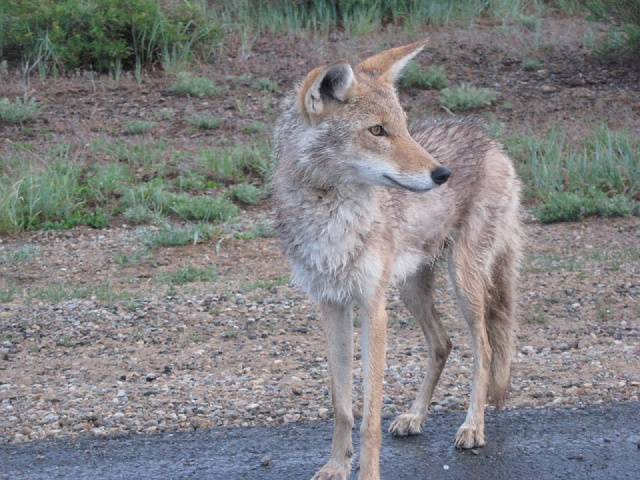 OHIO – Ohio Division of wildlife warns citizens of Ohio of potential coyote sightings from young leaving the den this time of year.

Coyotes are common throughout Ohio’s 88 counties in both rural and urban settings. There are no wild wolves living in Ohio. The coyote’s strength is that it can adapt and exploit most any habitat to its advantage. While many wildlife species avoid developed areas and often decline as a result of human expansion, coyote populations sometimes thrive.

If you think you spot a coyote, be sure it is truly a coyote and not a stray dog. If you believe the animal is a stray dog, contact your county dog warden.

If you do have a coyote on your property, remove all “attractants” to possibly deter the coyote from returning. This includes removing garbage and pet food before nightfall and cleaning up around the grill. Coyotes prey primarily on small mammals such as rabbits and mice. Small pets may also be taken. Keep small dogs and cats inside or stay with them at night when coyotes are most active. Coyotes are curious, but generally fearful of humans.

If the coyote visiting your yard seems to lack a fear of humans or is presenting a conflict even after removing attractants from your yard, contact a nuisance trapper. You can locate a trapper near you at http://ow.ly/pN5A30pqiE0. Coyotes in rural areas can be controlled through legal hunting and trapping methods. Consult the Ohio Hunting and Trapping Regulations booklet for more information.

Coyotes are most frequently seen and heard during mating season (January-March) and when juveniles start leaving the family pack (September-November). Coyotes are naturally timid animals and will usually flee at the sight of a human. If a coyote lingers or approaches, however, the following actions can be taken to scare coyotes and chase them away:

Be as big and loud as possible. Do not run or turn your back as that action might provoke the animal to chase.
Wave your arms, clap your hands, and shout in an authoritative voice.
Make noise by banging pots and pans or using an air horn or whistle. Make the animal uncomfortable so it leaves.
Throw small stones, sticks, tennis balls or something similar. Remember the intent is to scare and not to injure.
Spray with a hose or a squirt gun filled with water and vinegar.
Shake or throw a “coyote shaker”—a soda can filled with pennies or pebbles and sealed with duct tape. The loud noise should scare the animal away.