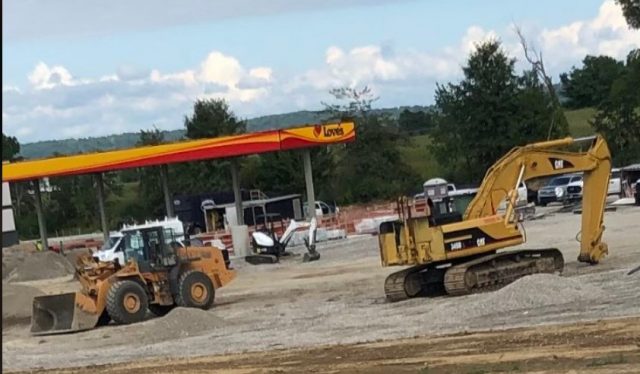 LANCASTER – If you have ever traveled 188 to Lancaster from Circleville there is a lot of farmland to see but not much of anything else, including gas stations if you needed it, now Loves is making a change to that.

Loves broke ground in May of this year at the intersection of 22 and 33 onramps in Fairfield county and plan to complete the project before the end of the year.

In an email from the company Loves says that they plan to be open by the end of November.

“As of now we have no delays or issues reported that would cause a delay in opening,” said Loves.

Hardees Restaurant is planned to host inside the gas station for a quick meal while filling up. This combo is seen around the country with other Loves.

Love’s Travel Stops is the nation’s leading travel stop network with more than 580 locations in 41 states. Founded in 1964 and headquartered in Oklahoma City, the company remains family-owned and operated and employs more than 34,000 people. Love’s provides professional truck drivers and motorists with 24-hour access to clean and safe places to purchase gasoline, diesel fuel, fresh coffee, restaurant offerings and more. Love’s has over 420 truck service centers, which include Speedco and Love’s Truck Care locations. Love’s and Speedco combined is the largest oil change, preventive maintenance and total truck care nationwide network with over 1,500 maintenance bays and 1,200 emergency roadside vehicles available for customers.