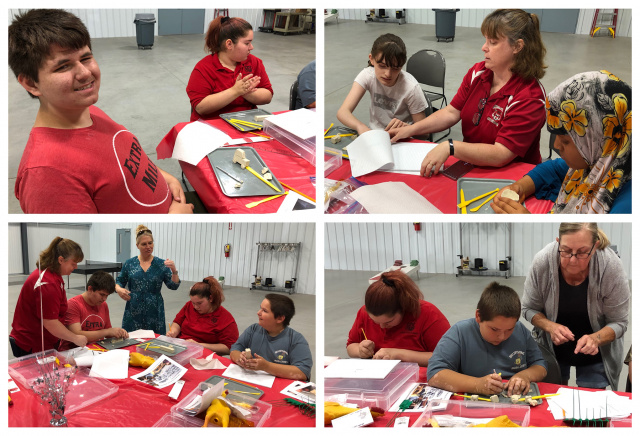 PICKAWAY – Navigating Project-Based Learning One Design, One Shark at a Time

School may be out for summer, but a handful of Summer Learning Academy students from Circleville City Schools are using this time of year to dive deep into a sea of problem-solving scenarios in a Shark Tank-style environment. Their journey recently brought them to Health Care Logistics where they navigated the process of transferring ideas to paper and, ultimately, into the 3D world.

This year’s academy, which is an extension of the Extra Mile after school program, focuses on project-based learning and STEM (Science, Technology, Engineering and Math) as students learn through investigations and build-offs for judging in front of “sharks” during the final week of programming.

“They are learning about how a thought becomes reality,” said Wendy Jordan, Circleville Middle School Intervention Specialist.  “ … They have to present a prototype, [research] cost of production, what it will sell for, what they are looking for in start-up costs, and what percentage of the profit the sharks will get.”

“My goal was to provide the kids a medium through which they could get the idea from their head to paper,” Clouser said. “Clay is the perfect three-dimensional medium for folks who are not that familiar with CAD (Computer-Aided Design) tools.”

Students started with an idea – any idea of their choice – then proceeded to sketch that idea on paper.  Next, they were coached on the process of sculpting their sketch using clay.

“One fellow realized his drawing had two wheels but needed four to work right,” said Bethany Reid, HCL VP of Administration and Marketing. “This demonstrated many things: it’s hard to just put things on paper for development, and try, fail, adjust, try again!”

Clouser said the key to becoming a great designer/artist is honing your skills to be able to produce the object in your head in a three-dimensional medium.

“From a 3D prototype, the object can be passed around a table or room and critiqued so that the idea can be refined for mass production,” he said. “People genuinely connect with objects that they can touch and feel.”

“The one thing that surprised me was their response to the size of the warehouse,” she said. “Most of them have probably never seen the inside of one.  Wal-Mart is big, but a tall warehouse makes them see how product is stored and shipped.”

The HCL team is grateful for the opportunity to help the Summer Learning Academy students learn and grow through hands-on experiences and wishes them the best of luck as they swim toward the “sharks” they’ll encounter on their journey!