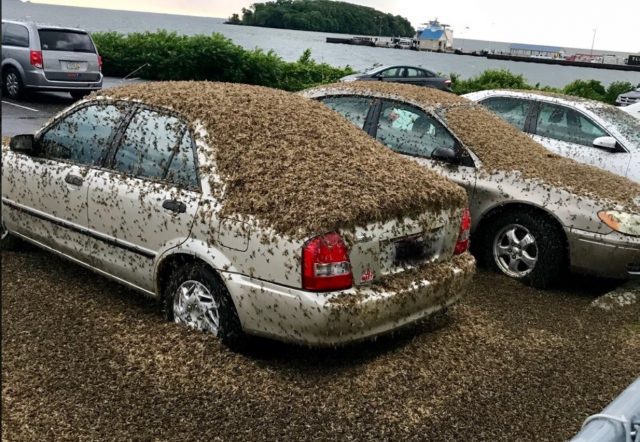 LAKE ERIE – Mayflies swarm Port Clinton from May to Early July in an epidemic natural fashion.

Mayflies live most of their lives underwater towards the end of their life cycle they hatch wings and fly just to reproduce and die about 24 hours later.  Adult Mayflies do not have mouths or digestion systems!

The swarms off the lake are so thick that National Weather actually detects them on the radar. So what do the locals in port Clinton do with this natural phenomenon, they just deal with the plague. Some families turn off lights at night so as not to attract more bugs to their homes, like snow some people have to use brooms to remove them from their vehicles before the morning commute.

The little bugs are harmless other than, their bodies contain a oil substance that makes things slippery, especially after the rain, with thousands of them on roads and walkways you can slip on the bodies of these creatures just trying to get to your car.

The city of Port Clinton has gained approval from the Environmental Protection Agency, and a grant from the Ohio Lake Erie Commission, for the very first mayfly composting site in America, because Mayflies only live for 24-72 hours in this flying form, they spend years at the bottom of the lake.

Lake Erie is known for its Walleye fishing, the mayflies may be the secret? If you choose to vacation in this area around this time don’t wear anything white.