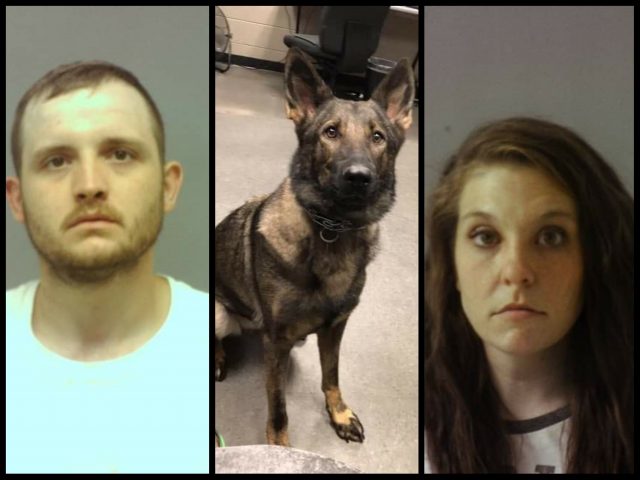 Logan OH- On 8-24-2020 at 9:00P.M. According to a police report obtained by Scioto Post, a high speed chase occurred involving a motorcycle with a passenger and the speeds that were reached on E Front Street to Hocking Drive were in excess of 100 MPH.

The pursuit blazes through Logan streets and then out on a few State Routes, eventually ending on Twp Rd 430 in Perry County. Where Logan Police was joined by New Straitsville Police for assistance. The suspect driver and passenger ditch the motorcycle and flee on foot into a field.

Logan Police dispatched K9 Anni to assist in the apprehension of the driver who was spotted 200 yards in the field ahead of the officer. A short time later, the officer lost sight of K9 Anni and the suspect, so he called Anni back and dispatched the K9 again, this time for tracking purposes and Anni did not disappoint.

K9 Anni lead the officer directly to the hiding suspect who was identified as Jesse Lee Hart of Lancaster, Ohio. The report goes on to state that K9 Anni did not bite the suspect due to the K9 training for suspects who are not resisting arrest.

Logan police also found the passenger of the motorcycle, hiding in the field as well after finding her backpack and seeing her bright pink jacket that she was wearing. She was identified as Mallory A. Myers of Logan.

During the pursuit Mr. Hart runs 5 stop signs, 2 red lights, passes one car in a no passing zone, fails to use turn signal 7 times, and goes left of center at least 39 times.

Once at the jail, New Straitsville PD locates suspected heroin in the pocket of Mallory Myers.

Jesse Lee Hart has been charged with Failure to comply with order or signal of P.O elude or flee, Obstructing official business and he also had a warrant for Failure to Appear on previous charges. We are not sure if more charges will be added.

Mallory A. Myers has been charged with Failure to comply with order or signal of P.O elude or flee, Obstructing official business and possession of heroin.

They are both currently incarcerated in SEORJ awaiting court appearances.