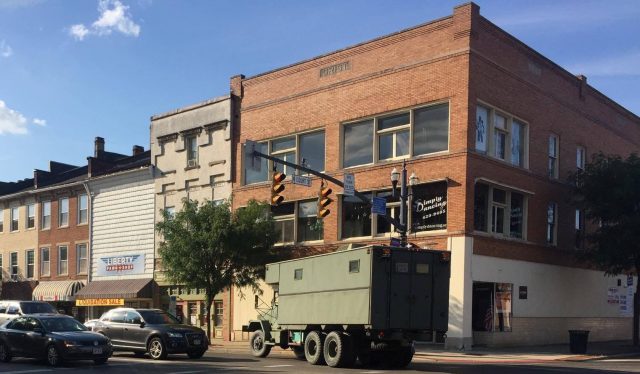 Its old and colored, painted with an aged, drab green. But its one of the rarest sights in the world, and you’ll see it here in Pickaway County from time to time.

Made in 1968 for the Vietnam War, the M46A2C ‘Deuce and a Half’ trucks were sent over to participate in the conflict. During the span of the war, all trucks sent to Vietnam were lost or abandoned in the country, leaving only seven left in the world. This one never made it overseas as it was lost and abandoned, never seeing combat itself.  Instead, this truck calls Ohio its home and is used for a different purpose than what it was built for.

Its current mission is gun safety classes for kids. The truck is fitted with 21st century technology. Kids are able to watch safety videos inside the truck, and it comes equipped with a generator for mobile classes. “Kids love the flak jackets, among other things the vehicle employs for its mobile safety and education,” said Jonathan O’Connor, its owner.

“Despite its rarity, it has a fantastic security system,” said O’Connor. “It has a stick shift.” The vehicle gets an incredible 5 miles per gallon on the road, but doesn’t require gasoline. Jonathan told us he can run the vehicle on oil, kerosene, transmission fluid, “Pretty much anything.”

When its time for the 22-quart oil change, O’Connor disposes of the used oil by simply dumping it into the fuel tank. The vehicle has a 6-wheel drive along with a 6-cycle multi fuel engine that uses compression instead of glow or spark plugs.

The truck has also been used in other capacities in the County, too. When the Pickaway County Sheriff’s Office was looking to purchase new shotguns for the police force, the truck was used to assist in cleaning and refurbishing the old firearms, saving the county money.

For more information on the owner of the truck, visit GunEnvy.com