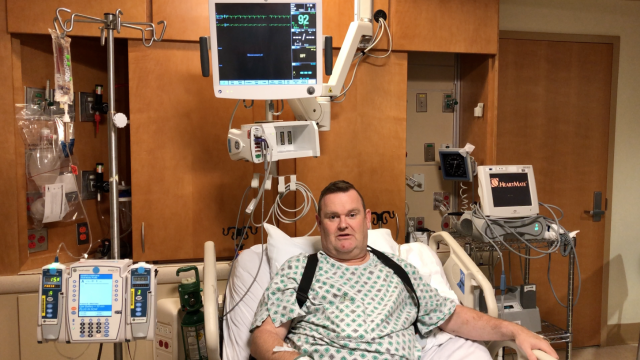 CIRCLEVILLE – On December 7, 2012 Mark Sandys Heart stopped and couldn’t be restarted due to major damage to the left ventricle “the pumping part” of his heart. Two days later on January 9th 2013 they implanted the Lvad in Marks body.  A Lvad is a pumping machine “Ventricle pumping device” that assists the heart in moving blood around the body, without this Mark would not have survived.  When attached to a Lvad you don’t have a heartbeat! The downside to this is that Lvad isn’t a permeant solution for Mark’s issue, a heart transplant is. 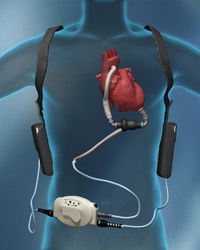 The longest a person has lived with a Lvad is 7 years, the manufacturers estimate someone could live for up to ten, but no one has.  The reason that most people do not live longer than 7 years is because of blood clotting in the device is common and sometimes causes death.  According to myLVAD.com “today’s LVAD patients have at least an 85% one-year survival rate and can enjoy fulfilling lives and in many cases even return to work. By contrast, advanced heart failure with medical therapy alone is known to have a 25–50% one-year survival rate.”

This life changing event changed Mark “for the better he says.” Mark claims “he was shy and didn’t like crowds too much.  After his medical procedure Mark set out to do things with his extended life.  Mark started talking to schools and telling his story, he started visiting other Vlad survivors that were having issues.  He spent time trying to keep others sprits up and said goodbye to some.  Make started a free event called Party at the Y in Circleville Ohio for kids to come play games and have fun with peers in a safe environment, something the small town of Circleville needed. 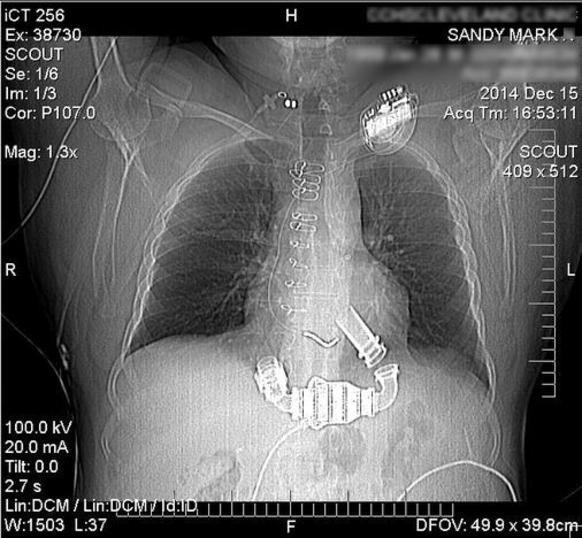 Still Mark waited for his chance at a heart transplant, as time goes on and clots arise your chances of survival are lessened.  On October 2016 Mark got bad news. “I went in to the Ross Heart hospital at OSU Columbus Ohio to have my liver checked. While I’m there my LVAD alarm began to alert me that there was a problem. A couple of guys flew in to fix the issue but that night my alarm sounded again. It turned out to be a fracture of my internal LVAD wires. This meant that I would either have to get a heart transplant or a replacement LVAD.
So for the next 3 months, I sat in a hospital room at OSU awaiting the news that a heart could be available. Also at this point I had now been moved to the very top of the transplant list. (1A)
What happened next was not part of the plan!
So one day I noticed a little more drainage from my driveline site. This is where the wire goes from the outside control unit to the pump, that’s inside me.
So the doctors decided to do a abdomen scan. I had to wait all over the weekend until the Monday to finally get the results. The scan found a cancerous area on my kidney.
So this new news meant that I could not be on the heart transplant list until it was removed and I’d had the all clear.”

Mark had cancer and had been removed from the heart transplant list after waiting since 2012.  Mark now had to fight the cancer that was growing inside him, before he would be put back on the transplant list.  In July of 2017 Mark spent 3 week in OSU to get his cancer removed, and according to doctors he has a %1 chance of the cancer coming back.  Mark now has to go a year cancer free to be placed back on the Heart Transplant list.  In February 2018 he was cleared from cancer and was relisted on the transplant list, but Mark wasn’t out of the woods yet, doctors had identified a clot within the system.  As the clot started to get bigger, last week July 20 Mark was placed at Richard Ross OSU’s heart transport hospital and was placed at the top of the list.  “Waiting for a heart, hearing that call that a heart is available is a emotional time.  “You need the heart to live and continue your life, but you know someone else’s life has ended,” said Mark.

Mark received the call today July 26,2018 that a heart is available today, he will have surgery today, someone who donated life has passed along a gift to him today, while someone rejoices in life another will morn in sorrow.  I will give updates to Marks condition as he comes out of surgery.  For more information on Mark and information about everything Mark is doing for the Circleville community: http://www.heartofmark.com/my-story.html