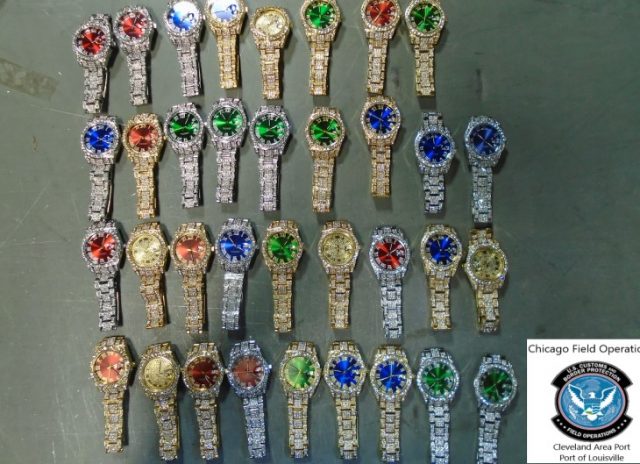 LOUISVILLE, KY— From September 10-30 U.S. Customs and Border Protection (CBP) officers assigned to the Port of Louisville seized 66 separate shipments containing 3,345 counterfeit designer watches worth $67.07 million, and the flow of counterfeit watches continue. On October 4 and 5, CBP officers made two seizures of 59 Rolex and three Audemars Piguet counterfeit designer watches. Had these watches been real, they would have been worth $2.68 million.

The first shipment arrived from Hong Kong and was destined for a residence in Puerto Rico. The second shipment was arriving from Hong Kong and was heading to Miami. Officers inspected these parcels to determine if the goods were admissible in accordance with CBP regulations. The first shipment had 24 Rolex watches and 3 Audemars Piguet watches, while the second parcel contained 35 Rolex watches. The watches were determined to be counterfeit by CBP’s trade experts at the Centers of Excellence and Expertise. If they were real, the watches would have been valued at $987,000 and $1.69 million respectively.

“CBP officers play a critical role in the Nation’s efforts to keep unsafe counterfeit and pirated goods from harming the American public,” said Thomas Mahn, Port Director-Louisville.  “This is yet another dramatic example of how CBP officers work every day to protect the American consumer, the US economy and US jobs.”

Sold in underground outlets and on third party e-commerce websites, counterfeit commodities fund smugglers and members of organized crime. Consumers often believe they are buying a genuine product but soon realize the item is substandard and potentially dangerous.