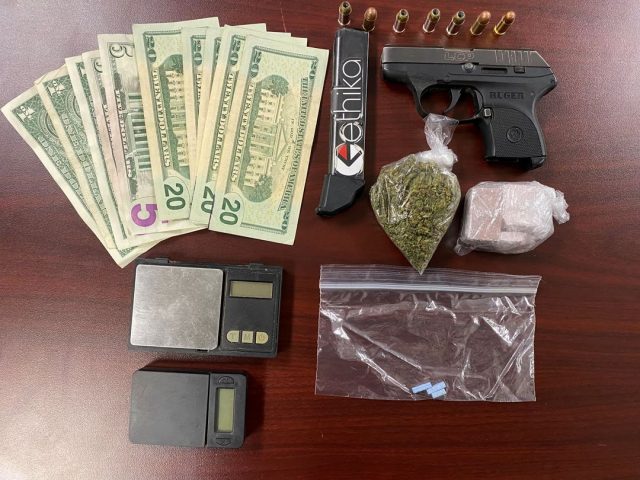 JACKSON – A Traffic stop became serious after an uncooperative male had to be ordered out of a vehicle in Jackson county.

According to the Jackson County sheriff’s office, a speeding violation led to an arrest of a Columbus man on Monday for illegal drugs.

Jackson County Sheriff Tedd E. Frazier’s Deputies were on patrol on US Route 35 Monday evening, when a vehicle, traveling at a high rate of speed was observed eastbound on US 35, near the Chillicothe Pike exit. Deputies noticed a strong odor of marijuana coming from the vehicle during the stop. The marijuana was found in the vehicle after K9 Hersey gave a positive indication for the presence of the odor of illicit drugs coming from the vehicle.

The driver identified himself as Shuron Howard from Westerville. The passenger of the vehicle, a male, identified himself as someone else. Just before and during the search, Martin was directed several times by deputies to keep his hands on the dash, however, he did no comply and was asked to step out of the vehicle. During the search of his person, Martin became uncooperative. Deputies discovered a zipper bag that was on Martin’s right hip, where they located a Ruger LCP .380 semiautomatic handgun that contained an extended magazine and had seven rounds in the magazine. The zipper bag also contained digital and scales and three Xanax bars. Martin then stated to deputies that he had marijuana in his underwear and that he was about to go to prison for a long time. Martin told deputies, after they discovered his wallet, that he lied about his identity. He stated he stole someone’s driver’s license, and that he was Dae’Shaun Martin. Dae’Shaun’s identity was confirmed by his Ohio driver’s license found in his wallet. He took responsibility for any illegal items that would be found in the search of the vehicle and that the other male did not have knowledge of anything illegal that was in the vehicle.

During the search of the vehicle, Deputies discovered pink lock box, containing 56 grams of heroin and $100 cash. A set of digital scales were discovered on the passenger side of the vehicle.

Howard told deputies that he had asked Dae’Shaun, his cousin, to ride with him to go visit his girlfriend in Gallia County and did not know his cousin had the gun or drugs in his possession. Howard was issued a verbal warning for the speed violation and was released.

The case will be forwarded to the Jackson County Prosecutor for the resolution of this case.