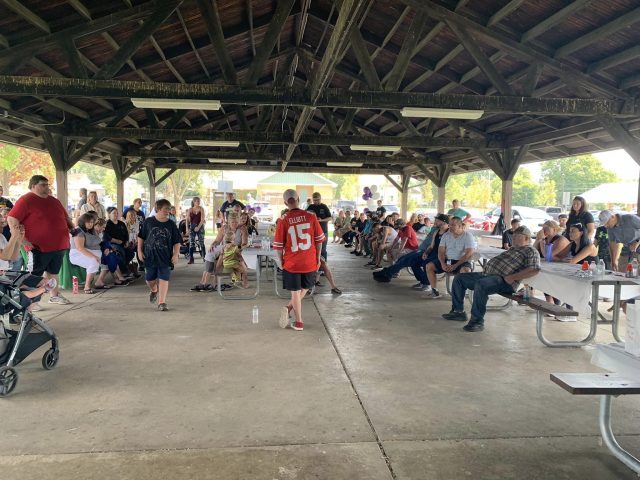 Circleville – “I believe this is the largest gathering in the 8 years we have done this,” said Jason McGowan Chief Probation officer for Circleville, ” I believe it is a testament to what we are doing here in the area.”

The three-hour event was celebrated, with food, fun, games, and most importantly relationship. Throughout the event, several people spoke on their path to sobriety and how their story has changed.

A woman who wouldn’t fit the stereotype of addiction spoke at the event, her first name was Jackie, and she told the group that her addiction started from an injury and surgery. A doctor prescribed pain pills that spiraled out of control into a drug dependency. Jackie said that she’s a regular church attendee, she’s a mom and a wife.

“Your body isn’t designed to be on pain medication for so long, ” she said, ” My body was completely dependent, when the pain pills weren’t enough I moved on to fentanyl.”

Jackie said that she got to a point where she was done and started reaching out to her faith, “I knew it was going to be ok, after asking God when was enough for me. I just had to work on me, but I had to gather my strength because I really didn’t even want to get out of bed.”

Jackie said that she used PARS (Pickaway County Recovery Services) to help her win her fight of addiction. She happily reported that shes 10 months into recovery from a seven-year addiction.

32 Year Old Ryan who shared his story bravely in front of a large crowd. He said that addiction has been almost a lifetime, and doesn’t remember much beyond drugs. He told the crowd that he started using drugs at 14 to get away from home life. His mother who was a single mom brought in a lot of,”stepdads.” He said his childhood wasn’t good, living between his mom and Grandparents’ drugs was his answer of, “escape.”

“I had my first overdose at the age of 15,” Ryan said, “my airway collapsed and they had to cut open my throat. I have a large scar.” As he pointed to it he continued to speak, ” A lot of people would stop after that, but I didn’t, I had just gotten started.”

Ryan said he started with pills and soon graduated to heroin by 18, which was 14 years ago. Ryan said that in 2009 his grandmother passed away and he said that spiraled him even more out of control.

“I lost everything, driver’s licenses places to live, friends kicked me out, I took advantage of a lot of people, I ruined relationships, the family didn’t want me around, I was out of control.”

Ryan said in the past he tried to get clean and went a long time sober, he said that he went almost two years but, it all fell apart because he was, “dry sober,” and didn’t have the network of people to help him.

“I was sober but not living a sober life,” said Ryan, “I ended up relapsing and using again, I overdosed several times. My life changed when I overdosed in May of 2021 when my 12-year-old son found me. That was the hardest thing I’ve gone though in my life. The next day probation arrested me. It changed my life. I wanted to finally recover for me, not my girlfriend, or my family, it was for myself.”

Ryan was one of two people who graduated recently from the first drug court class in Circleville. It involves many local entities including Scioto Paint Valley, Circleville Probation, and PARS.

Leah Raymer, outpatient director at PARS said that this day is the biggest one of the year for them because its a day that everyone can celebrate hard work and seeing how lives have changed.

“We see these people on their worst days, and we become part of their story, we walk with them and watch them succeed. It’s fulfilling. Recovery is hard and not everyone succeeds the first time period. The community now is starting to understand recovery and that shows today.

Raymer said that the community steps up year after year to support this event to sponsor food and giveaways.

“Kingston National Bank, Curtis Christopher, Scioto Valley Coffee, Roosters, Tim Hortons, Goodwin’s Family Restaurant, the Pickaway County Family YMCA, Classic Cutters, and OhioHealth. Our community is pretty aware of the addiction problems that we have here. To support the positive is a good way to show we care.

“It’s important for people in recovery to know that the community supports them, “said Jason McGowen, “A few years ago we decided we needed to do something, there’s a stigma behind addiction, and it’s extremely important for people to know we stand behind them to help. We have had to learn how to help people in recovery, this epidemic caught us by surprise, so we have learned how to help people by talking to them and creating a group around that. We can’t arrest our way out of addiction, we’ve tried, and we have to learn and adapt best practices to help people recover. If someone came here today to see what kind of support people in recovery have they would realize there are a lot of people, all they need to do is reach out and we will help them. Today shows that.”

“Pickaway county is blessed now to have so many facilities, programs, sober living environments, something our community has built. On top of that we have our core systems like the probation department, law enforcement, we have learned about addiction now. Sometimes it does take getting arrested and dealing with the consequences. Sometimes the consequences have to outweigh the benefits before they change, but while we are doing that we build a repour with these people and let them know we are here to help also. There are so many groups you can reach out to now to start that walk you just have to do it.”