Sheriff North plans have his deputies use the motorcycles for a multitude of missions. They will not only be used for patrol functions such as traffic enforcement, traffic crash investigations, and escorts, but also education, special events, parades, and community relations.

We hope that having these motorcycles on patrol and riding among the touring motorcyclists will help reduce the numbers of crashes we have within the county.

Sheriff North stated: “We acquired the motorcycles earlier this week, and we wanted to deploy them as soon as possible to take advantage of the beautiful weather before it is gone for the year.”

“We’ve already sent our deputies to several of the elementary schools to put on demonstrations for students, and sent them out on a couple community events within the county. The motorcycles have been extremely well received wherever they have gone; the engagement from the public is really why we felt this was a good direction for our Office to go in.”

“The deputies patrolling on them have reported receiving people waving at them and giving them a ‘thumb-up’ every time they have gone out on patrol.”

“We encourage anyone hosting a special event or poker run let us know so we can have the motor deputies out for them.”

These motorcycles were purchased without requesting an increase to the Sheriff’s Office budget. A specialized grant targeted at traffic enforcement will be obtained by the Sheriff’s Office and will provide funding to pay for overtime for deputies to combat traffic violations which contribute to crashes, such as speeding, distracted driving and reckless driving. 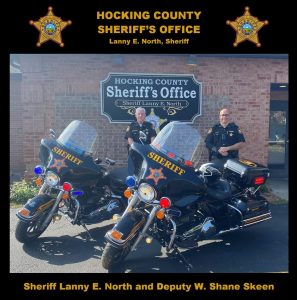