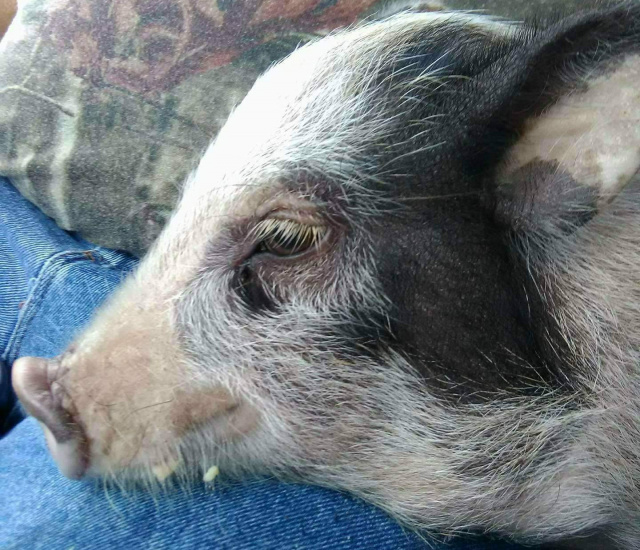 CIRCLEVILLE – About a month ago, a pet pig escaped from Curtis Conrad’s house on East Street, which is on the edge of Circleville, behind WalMart. Multiple people, including the Pickaway County Sheriff’s Department have seen the pig between Wal-Mart and Logan Elm Village, but have not been able to capture him. On Sunday, a Logan Elm Village resident chased the pig, but he was too fast to catch. Later in the day, a larger group went to the area to help bring the pig home, but he was nowhere to be found.

Conrad said he’s been out several times in the last month to catch the pig, but hasn’t been able to. Somebody tagged Conrad on Facebook this morning, and he and his son came out to help with the search for their pet pig. They said the pig is an escape artist, and he’s very fast.

Luci Barnes, a resident of Logan Elm Village who grew up on a pig farm said, “The trick to catching a pig is not to chase it.” She recommends 5-10 people with large pieces of cardboard or baby gates to enclose the pig. Then, after it has calmed down, one person should approach the pig calmly and try to get it into a cage. Barnes has volunteered to help catch the pig if someone sees it again. “If you chase the pig, you’re not going to catch him. He’s too fast, or he’ll go right through you.” If you see the pig, call The Scioto Post at (740) 571-9045. We’ll inform Barnes and Conrad. Also, we’ll try to get video, because it will be hilarious.